There’s a stranger in your home…

When her stepmother dies unexpectedly, Caro returns to her childhood home in Derbyshire. She hadn’t seen Elizabeth in years, but the remote farmhouse offers refuge from a bad relationship, and a chance to start again.

But going through Elizabeth’s belongings unearths memories Caro would rather stay buried. In particular, the story her stepmother would tell her, about two little girls and the terrible thing they do.

As heavy snow traps Caro in the village, where her neighbours stare and whisper, Caro is forced to question why Elizabeth hated her so much, and what she was hiding. But does she really want to uncover the truth?

This spooky little story opens at the funeral of a woman who, it would seem, is not going to be mourned by either of her two step-daughters. Steph has made the journey from New York, meeting her younger sister Caroline for the first time for many years, and even though the sisters are now strangers there is a sibling bond between them which stretches back to the time they spent growing up at the isolated farmhouse in rural Derbyshire.

Almost against her better judgement, Caroline returns to the farmhouse to sort out her stepmother's effects and finds the house to be just as terrifying as she did when she lived there with her step-mother. The isolated nature of the farm, along with some very painful childhood memories, ensure that Caroline's stay at the house in charged with emotion and filled with an absolute terror of reliving past traumas.

I found Cuckoo to be a really interesting psychological thriller. It's proper scary in places, with noises and unexpected happenings in the house which seem to be beyond Caroline's control. The only bright spot in this rather dark tale is Caroline's burgeoning relationship with her neighbour, Craig, who came to her rescue with alarming regularity.

I read the book long and late in order to finish the story as I was quite enthralled in the melodrama that was constantly unfolding. I particularly enjoyed the references to some rather dark fairy stories, which were definitely not the cosy sort for children, and the long buried family secrets which were finally revealed took me by surprise. 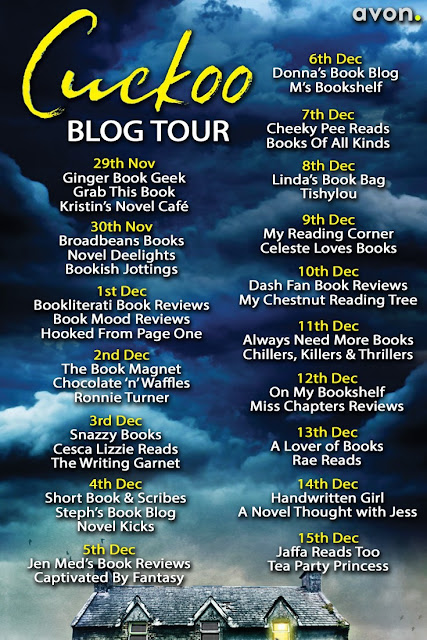