🎄Blog Tour ~ The Thing About Clare by Imogen Clark


The four Bliss siblings have a loving but complicated bond, but when their mother, Dorothy, dies seemingly without a will, this relationship is put to the test. As the mourning siblings try to make sense of the situation, one of them is caught with a secret: before she died, Dorothy entrusted her favourite daughter with her will and a letter—and told her to destroy them both.

Clare Bliss has always been a bit out of step with her three siblings. The complex relationship that they have with each other is further complicated when Anna, one of the older sisters, is entrusted with a secret that their mother has kept from them. What then follows is a cleverly constructed story about the complexity of family relationships and of the difficulties which arise when one of the siblings is thought to be more favoured than the others.

This is an interesting family drama which looks at the dynamics between siblings, especially when one is obviously a very different character to the others.The author writes about complicated family relationships in a very readable way, highlighting the question of nature over nurture and questioning whether it's our upbringing or our genetic makeup which makes us into the people we become.

Moving forwards and backwards in time the story highlights the Bliss family background bringing the four sibling’s stories into the spotlight and revealing fascinating details of their lives, both as a family and separately.

The Thing About Clare is a clever family drama, at the heart of which is a story about a devastating secret, which, when revealed, will have repercussions for the whole of the family. The story kept me interested from start to finish, I especially enjoyed watching how the drama played out within the wider context of the story.

Imogen Clark trained as a lawyer but left her legal career to care for her fur children. She recently returned to her first love - books- and went back to University , studying part-time while her children were at school , graduating with a BA in English Literature. Imogen lives in Yorkshire with her husband and children, Her debut novel, Postcards from a stranger was published in August 2018 and is a number one Amazon bestseller. 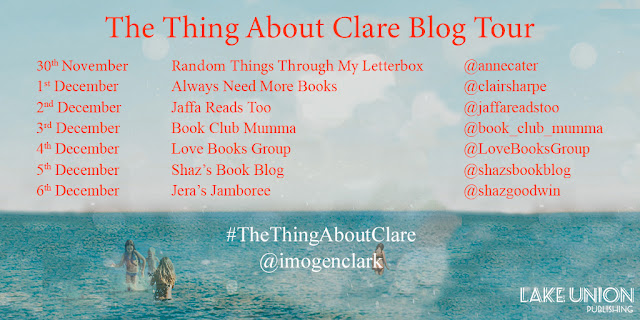