Jack Harper isn’t a bad man, but he’s stuck in a loveless marriage with a mediocre job just trying to keep sober. The only good thing in his life is his son. When an old college friend introduces him to a new extramarital dating website, he tentatively reaches out to find a distraction from his misery.

But when he goes to meet up with his steamy online date, he quickly realises it was a dire choice.

Soon, Jack finds himself desperately trying to prove his innocence for crimes he did not commit, and the life he once had – unhappy as it was – is nothing but a dream. Now, he’s living his worst nightmare.

Jack Harper seems like nice enough guy, he works in real-estate, does what he can for his family and adores his son, however, his dwindling relationship, with his wife, Maria, has hit an all time low. When an old friend introduces Jack to the idea of an extra marital dating site, he is, at first, horrified by the thought of it, but then curiosity gets the better of him, and before too long, Jack is playing a very dangerous game.

When then follows is a complex and disturbing story about being in the wrong place, at the wrong time, and pretty soon Jack discovers, to his cost, that not everything is as it first appears.

Too Far is one of those complex stories which you want to read in one sitting, quite simply because you can't put it down. The plot draws you into the complicated and uneasy world of extramarital dating, and very quickly plunges you into what becomes, all too soon, Jack’s nightmare life.

Too Far grabbed my attention from the very beginning and didn't let go until the whole story had unraveled, and boy, does it take some unravelling. There are thrills and spills aplenty and a cast of characters who, whilst not always very likeable, certainly have a forceful presence within the story.

A deeply disturbing psychological thriller with an edginess which makes the story all the more compelling.

Jason Starr is the author of Cold Caller, Nothing Personal, Fake I.D., Hard Feelings andTough Luck followed by Lights Out, The Follower, Panic Attack, Savage Lane. He was born in Brooklyn in 1966 and still lives in New York City. 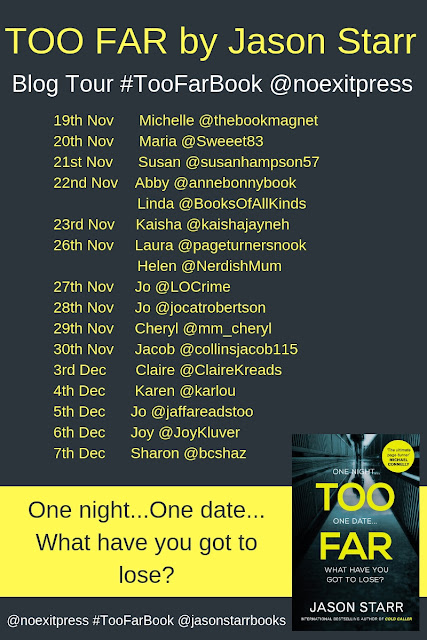