🎄 Blog Tour and #Giveaway ~ Seven Days of Us by Francesca Hornak


It's Christmas, and the Birch family is gathering for the first time in years.

Emma is elated at having everybody under one roof, but her oldest child, Olivia, is only home because she has nowhere else to go. She's just returned from treating an epidemic abroad and must stay in quarantine for a week - and so, too should her family.

For the next seven days, no one can leave the house and no one can enter.

It doesn't sound too hard. But a week with your nearest and dearest can feel like an eternity, especially when they're all harbouring secrets.

One of whom is about to come knocking at their door...

My thoughts about Seven Days of Us..

The Birch family like to spend the festive season at their Norfolk country home, and whilst certain traditions remain, like filling Christmas stockings and digging up the Christmas tree, they don't always spend time quality time together. This festive season is going to be very different, as they have to spend seven days together in complete isolation. The reason for this quarantine is that the elder daughter, Olivia, who for the first time in ages is spending Christmas with the family, has just returned from working as an medical aid doctor in Liberia, treating a deadly virus, known as Haag.

This forced isolation allows the family the opportunity to rediscover what's been happening in each of their lives but, very soon, the fragmentation of a family who don't really communicate with each other, comes to the fore and forms the basis for a fascinating look at the minutiae of family life. There's so much going on in the story, from the sibling rivalry between the sisters, particularly with Phoebe, who is just so flimsily materialistic compared to her ethically responsible older sister. Husband and wife, Andrew and Emma have their own complicated secrets which, when discovered, will have the power to change the family dynamic forever.

I enjoyed the story very much especially the multiple points of view, which help to give a fascinating insight into the innermost thoughts and feelings of the family as individuals. However, as we find out in the story, being in forced isolation doesn't always bring out the best in people, and the complicated journey of discovery they each travel, made the story, for me, quite a compelling read.

There are some quite serious topics covered which are have an impact on the way the story evolves but there were also some lighter moments which made me smile. The Birch family with all their faults, flaws and failings could, very easily, be any family coping with life's problems.

Seven Days of Us is written with warmth, wit and compassion, bringing a whole new meaning to staying home at Christmas. 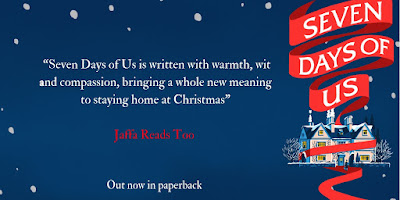 Francesca Hornak is an author, journalist and former columnist for the Sunday Times Style magazine. Her debut novel Seven Days Of Us is published by Little, Brown. Little Island Productions has pre-empted TV rights to the book. Francesca's work has appeared in newspapers and magazines including The Sunday Times, The Guardian, Metro, Elle, Grazia, Stylist, Marie Claire, Cosmopolitan and Red. She is the author of two nonfiction books, History of the World in 100 Modern Objects: Middle Class Stuff (and Nonsense) and Worry with Mother: 101 Neuroses for the Modern Mama.

Thanks to the publishers 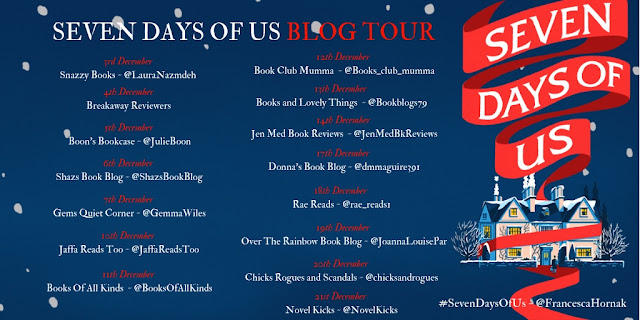