For nearly 10 years, ‘Team Philpott’, as their followers fondly refer to them, have been on a quite bonkers crusade, writing good old-fashioned letters to pop and rock stars (sometimes even sent to their home addresses with prior consent!), either picking up on genuine ambiguities within their lyrics or often deliberately misunderstanding them for comedic effect.

‘Dear Mr. Popstar’ proudly features 100 of the best letters and responses from famous and legendary names spanning the whole pop and rock spectrum, all relishing their involvement and revealing their own, in many cases, hitherto unknown humorous sides within what could well be the most interactive dialogue compiled between music stars and their audience ever undertaken.

There's nothing I like better than a good old fashioned letter, something that pops through the letter box and which prompts a reply. What the authors have done, in this cleverly put together collection of letters, is to encourage a reply from some of the great and the good of the music industry, often misinterpreting their unique raison d'etre, with hilarious results.

It's all good fun and those pop stars, with their considered responses to a myriad of rather bizarre observations, enter into the spirit, some, it must be said, with more gusto that others, but always with a, reasonably, good natured patience.

The individual Dear Mr Pop Star letters are the real star of this show, cleverly worded, witty, slightly reproving, but always with an astute eye for interpreting the anomalies and blatant ambiguities which surround pop stars and their music.

It's really difficult to pick out just one or two favourites but these have made me chuckle:

The letter to Dr Hook which observes that the interminable butting in of a telephone operator who kept demanding 40 cents more for the next three minutes must have been " a little bit more than infuriating, not to say a bit of a dent on the old wallet" and the fact that it would have been much cheaper to skype 😊

Spandau Ballet being ripped off for "buying a ticket to the world" since the planet is free...

Starship being admonished for the lyrics .."We built this city on rock 'n' roll"...and the reason why any construction needs a solid foundation.

And my absolute favourite is to the hapless Herman from Herman's Hermits being told off for cancelling the milk and skipping his breakfast cereal.

Dear Mr Pop Star is one of those clever little books that you can dip into and out of at whim, and what's guaranteed, is that there is always going to be, regardless of where you open the book, something to make you smile, and, before too long, you will find that you are nodding your head in complete agreement.

Derek and Dave Philpott are the noms de plume of two ordinary members of the public, working with  help from a worldwide social networking community. 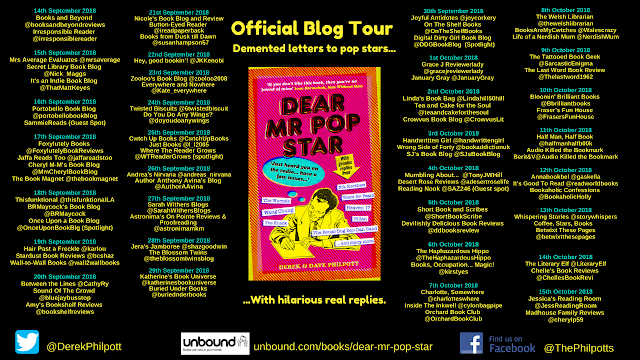