“Anyone can set fire to things.”
“But most people don’t. You’re one of the special ones.”

1914. Two sisters on opposing sides of the Suffragette movement. One, an up-andcoming prison warden responsible for overseeing the force-feeding of hunger strikers.

The other, swept up in the deeds of the cause. A poignant look at the struggle from both viewpoints.

Making the hardest decisions in life takes astonishing courage. Making a stand for justice. Realising that following your heart can mean the loss of your freedom.

Capturing the truth of such choices takes a writer of rare talent. In Clara and Nancy, Jon Walter has created two exceptional characters.

"Deeds not Words" is the rally cry of the suffragette movement and in 1914 two sisters put this motto to the test as they each become caught up in the organisation in very diverse ways. One will take the idea of deeds not words very much to heart, whilst the other, although wanting her independence is not persuaded to join the cause.

Clara and Nancy are two very different young women and yet, they are bound by the secrets they share about growing up in a small terraced house in London. The young women are disadvantaged by the constraints that society and their upbringing have placed on them and both Clara and Nancy have some difficult choices to make before they can become comfortable with the hand that fate has dealt them.

Set partly in the all-female prison of Holloway, where those suffragettes who have been imprisoned for their beliefs are force fed, doesn't make for comfortable reading, and yet, the author has made the situation very plausible without ever over sensationalising the disassociation of the prison warders as they go about the grim task of keeping the women alive.

Nevertheless She Persisted brings this momentous period alive in a very readable way and the author has created in Clara and Nancy two very different personalities and yet, both are totally believable. I enjoyed watching as their characters progressed throughout the story particularly, Nancy whose early start in the novel belied her later strength.

I read the story quickly, not because it's light on content, far from it, it’s all very interesting. I found the parts of the story about the suffragettes very enlightening, and enjoyed seeing how Clara’s and Nancy’s story played out within the wider scope of the novel. The ending I felt, almost lends itself to a continuation, and I would love to know what happens next for both of these young women as they live with the choices they have made, particularly as the country is fast approaching the onset of the First World War.

A former photojournalist, Jon Walter is the acclaimed author of Close to the Wind and My Name Is Not Friday. He was inspired to write NEVERTHELESS, SHE PERSISTED after reading Sylvia Pankhurst’s biography and being gripped by one question: when is it right to break the rules? Jon Walter is available for interview and write features on a variety of themes, including: being an advocate of protest; his personal experience of being arrested; and writing beyond his own experience. 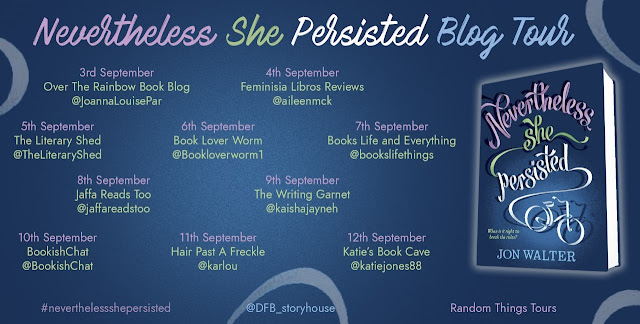