Blog Tour ~ The House Across the Street by Lesley Pearse

Twenty-three-year-old Katy Speed has always been fascinated by the house across the street . . .

The woman who lives there, Gloria, is the most glamorous neighbour on the avenue, owning a fashionable dress shop in Bexhill-on-Sea. But who is the woman who arrives in the black car most Saturdays while Gloria is at work? Sometimes she brings women to the house, and other times the women come with children.

Hilda, Katy's mother, disapproves of Gloria. She wonders where these mysterious visitors have come from, and what they want. Does Gloria have sinister reasons for secretly bringing strangers into the heart of the community?

Then one night, the house burns down. In the wreckage, the bodies of Gloria and her daughter are found. Katy is sure the unexplained strangers must be responsible, until her father is arrested and charged with murder.

Surely the police have arrested the wrong person?

The House Across The Street by Lesley Pearse is published on 6th September in hardback by Michael Joseph priced £20.00. This year is Lesley’s 25th anniversary year in publishing.

I know that whenever I start a new Lesley Pearse book I very quickly become immersed in the wonderful way that she creates both a memorable set of characters and a distinct awareness of time and place. Set in 1964, The House Across The Street tells the story of Katy Speed, a feisty young woman who sets out to discover just what happened when her neighbour’s house was set on fire. The dark mystery which is at the very heart of the story soon becomes compelling reading.

The author is just as comfortable at describing dramatic suburbia as she is at getting into the heart of a family mystery and this story is no exception. The story moves along quickly and takes us from the sleepy seaside town of Bexhill-on-Sea, to the London of the swinging sixties and, as always, thanks to this author’s trademark fine eye for detail, the story comes alive in the imagination and there’s an exciting sense of anticipation as the story develops. There’s an underlying dark thread to this story which the author carries off well, managing to get her point across without relying too heavily on shock tactics which might be too gritty, and yet, it’s quite a dark and menacing sort of tale, filled with secrets, and as Katy becomes entangled in this treacherous world, so the threat of danger sneaks ever closer to Katy herself.

This year marks the 25th anniversary of Lesley Pearse being published by Penguin, in that time she has sold over 10 million copies of her wonderful books, with the staggering thought that a Lesley Pearse book is purchased in the UK every 4 minutes. The House Across The Street is the 26th book in this author’s fine repertoire of compelling fiction, and it is to her credit that each successive story feels just as fresh and enthralling as her previous book. 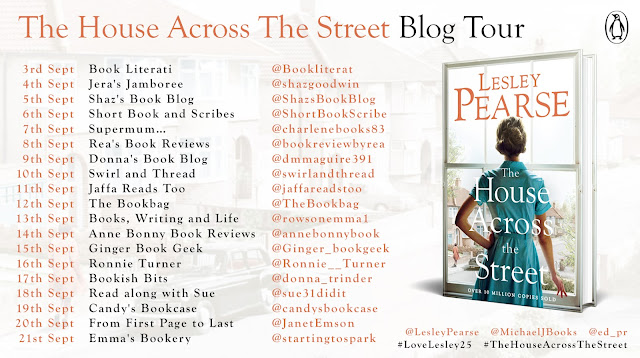