Review ~ Victory for the Shipyard Girls by Nancy Revell

The war rages on, but their friendship is stronger than ever.

With the war showing no sign of abating, Helen is thriving in her role as shipyard manager. But at home the return of her father brings a shocking discovery that tears her family apart. Gloria is shouldering the burden of a terrible secret. If the truth comes out there could be dire consequences, and it will take all her resolve to resist the pressure around her.

Meanwhile Rosie is throwing herself into her work, taking on as many shifts as she can. Anything to keep her mind off the fact that she hasn’t heard from her sweetheart in months…

With life in the shipyards tougher than ever, will the strength of their friendship see them through to victory?


This series of novels about the female shipyard workers during WW2 continues to exude its usual warmth and charm, and the women we have followed since the beginning have now become as familiar as friends. As each book ends it's always an eager wait until the next book is published as the author is very good at leaving the ending of her stories with a real cliffhanger...

In Victory for the Shipyard Girls we are again thrust into the lives of Helen, Rosie, Gloria and the other women who make up his close knit group. Each of them are facing their own particular challenges, but as ever the trials and complications of their lives draw the women ever closer, and as they share their hopes and fears, so their bonds of friendship get deeper and deeper.

With each successive story, this series seems to grow in confidence and, as a reader, the emotional investment in each character pays dividends as none of the women seem to outshine each other. I am equally interested in Rosie's story, as I am in observing just how Gloria is coping with  managing both her job in the shipyard whilst caring for her baby daughter. I'm afraid that Helen has never been my favourite character but I did worry about how she was coping with all the troubles that seems to come her way.

If you've followed this series from the start, and this is now book number five, then you will be delighted with this continuation of the shipyard girls story, and delighted to know that there is indeed another cliffhanger of an ending...

For those who like books about strong women coping during the tumultuous years of WW2 then this series would work for you, and, although the stories can be read as stand alone, my advice is to start at the beginning of this excellent series and enjoy from the very beginning.

The sixth book in the series, Courage of the Shipyard Girls publishes 7th March 2019 and is available to pre order now. 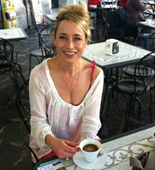 Nancy Revell is the pen name of writer and journalist Amanda Revell Walton, who has worked for the national press for the past 25 years, providing them with hard-hitting news stories and in-depth features. She has also worked for just about every woman’s magazine, writing amazing and inspirational true life stories.