A gripping and suspense filled domestic noir about a mother, her missing daughter and the dark secrets that engulf them.

Ever since her husband’s death collided with the birth of her daughter, postpartum depression has taken hold of Veronica Shelton. She can’t sleep, can’t work, and can’t bear to touch her beautiful baby girl. Her emotional state is whispering lies in Veronica’s ear: You’re a bad mother. Your baby would be better off without you. But not everything can be reasoned away by Veronica’s despair. Can it?

After all, the break-in at her house happened. The disturbing sketches she found in her studio are real. So is the fear for her daughter’s safety—especially when Veronica comes home to a cold, silent nursery and a missing baby.

As she turns from victim into primary suspect, Veronica realizes that only she can find her daughter. Authorities aren’t helping. They’re only watching. Veronica’s concerned mother has suddenly vanished from her life. And a new friend seems to be keeping secrets from her too. Now, reality is waiting for Veronica in a dark place—because someone’s mind games have only just begun...


The Waiting Room is one of those clever suspense stories which compels from the first chapter with an introduction which is both stark and dramatic. Our introduction to Veronica stems from a vivid beginning in which she loses both her husband and young baby and as she sinks lower and lower into postpartum depression so her story starts to gain momentum.

I was quite fascinated by Veronica, mostly she exasperated me but when her story is finally revealed I realised just how cleverly the author manipulated my emotional response to Veronica's character. Trying to decipher just what’s going on in Veronica’s troubled mind makes the story all the more fascinating, that she is deeply troubled by the effects of her life is obvious from the first however, just how deeply she is affected only comes to light as the story progresses. This clever convoluted psychological suspense story certainly keeps you guessing and makes sure that you are concentrating especially when the plot veers off in a completely different direction towards a conclusion, which it must be said, I didn’t see coming.

The Waiting Room is an exciting story written by an author who knows how to build up the necessary tension without ever losing sight of the overall integrity of the story. I read the book quickly as I needed to know just how Veronica was ever going to find resolution for her troubled past, but, of course, whether she does, or not, is for you to discover for yourself.

Author Emily Bleeker is a Mormon from the Chicago suburbs. She’s a former teacher who was inspired to start writing after surviving a rare form of cancer. 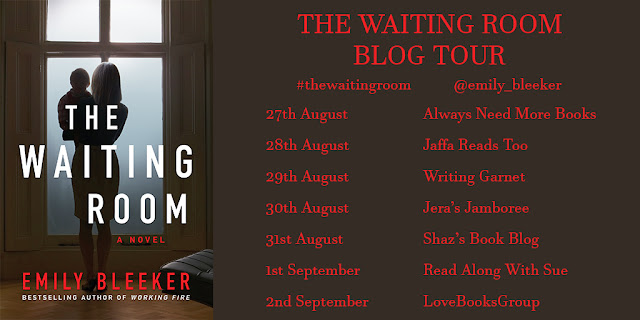