They stared at each other, and Maggie felt the tightness in her middle expand as it shifted, burning its way up… Painful sobs rose in her throat as Colin, his face expressionless now, reached for his mobile and tapped 999.

When three-year-old Olivia disappears from the beach, a happy family holiday comes to an abrupt end. Maggie is plunged into the darkest nightmare imaginable – what happened to her little girl? Further along the coast, another mother is having problems too. Jennifer's daughter Hailey is starting school, and it should be such a happy time, but the child is increasingly moody and silent. Family life has never seemed so awkward, and Jennifer struggles to maintain control. The tide ebbs and flows, and summer dies, but there is no comfort for Maggie, alone now at the cottage, or for Jennifer, still swamped by doubts.

A glint in the sand caught her eye, and she crouched down. It was a beautiful pink shell, exactly like the one she’d found yesterday. She eased it out from under a thick strand of brown seaweed and brushed it gently with one finger. It was covered in sand; it wasn’t nice to hold like the other one. She looked round for someone to help, but her dad was right along the beach with his back to her, staring at something up towards the hotel. She hesitated for a moment. The sea was just nearby. She would wash the shell herself and then she would take it home and give it to her granny. She smiled at the idea.

The sun was hot on her shoulders as she turned towards the water. It was difficult to rush along the loose sand; coarse grains were rubbing the skin between her toes. Nearer the ocean the beach firmed up and she stopped to empty her sandals. It was the only thing she didn’t enjoy about the beach, the way sand got everywhere.

What she liked best, of course, was the sea. It was like magic, the way the colour changed all the time. Today it was shining blue in the sunshine, sparkling like the jewels in her mother’s ring. She giggled as her toes met the first of the baby waves fizzing up the beach.

The water was cold but it was silvery-clear, rushing up round her ankles and pulling her in to play. She bent over and swirled the shell in the sea. Immersed in her task she rubbed and rinsed and rubbed again, oblivious to the cold water creeping up her legs. The shell was cleaning up nicely. It would look so pretty on her granny’s windowsill, lined up with all the other shells they’d collected last year.

Satisfied with her work, she stood up straight, jerking in surprise when she saw that the water was up over her knees now. She could feel the waves swirling round her legs, pulling her this way and that. It felt as if she was wobbling on a trampoline. It would be easier if there was someone to hold her hand. She looked back at the beach.

Both her parents were tiny figures in the distance now, much too far away to hear her if she called. The sea was right here, teasing her. She giggled again as the wash from a distant motorboat slapped and tickled against her thighs. This was better, it was fun again now.

Further out the waves were white-tipped and rolling towards her, and she remembered the picture book she and Daddy had read just before coming here. A fairy tale princess had caught a beautiful white horse on a wave, and rode away to the place where the sea joined up with the sky. If only she could do that too. She stood on tiptoe and walked a few paces to see if there were any white horses nearby.

Quite suddenly the water was deeper, and it was freezing cold too; it was splashing right up over her tummy. A larger wave almost lifted her off her feet and she cried out in panic, sobbing when she realised that she had dropped Granny’s beautiful shell. Tears hot on her cheeks and teeth chattering, she struggled to regain her balance, then waded a few steps in the direction of where the shell had vanished.

But the shell was nowhere to be seen. The water took hold of her again, pulling at her and pulling and all at once it was right up to her chin and there were no white horses at all, just cold cold water. It got in her eyes and nose and in her mouth, too, when she tried to shout for help.

Salty water was burning in her nose and pulling her down; the sea was filling her up and washing her away and she couldn’t stop it. The whole world was getting smaller… it was so cold. She was floating in cold white water now, just floating, and then suddenly everything was – gone.

Extract: By kind permission of the author 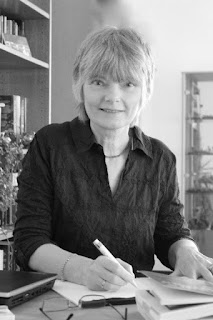 Linda Huber grew up in Glasgow, Scotland, but went to work in Switzerland for a year aged twenty-two, and has lived there ever since. Her day jobs have included working as a physiotherapist in hospitals and schools for handicapped children, and teaching English in a medieval castle. Currently she teaches one day a week, and writes psychological suspense novels and feel-good novellas with (most of) the rest of her time.

Her writing career began in the nineties, when she had over fifty short stories published in women’s magazines. Several years later, she turned to psychological suspense fiction, and her seventh novel, Death Wish, was published by Bloodhound Books in August 2017.

Linda’s latest project is a series of feel-good novellas, set on the banks of Lake Constance and just minutes from her home in north-east Switzerland. She really appreciates having the views enjoyed by her characters right on her own doorstep!