For international trouble-shooter, Jake Foreman, losing his job, house and wife all in one day is the kind of problem he can’t solve. And when an impulsive move lands him in even deeper water - the kind that could lose him his life - he decides it’s time to make some smart decisions.

The trouble is, knowing the right moves and making them is a whole different game. And Jake, who has been happily rubbing along in a job always suspected was just a shade away from being questionable, finds it all too easy to go with the flow.

Now he’s got to start learning new tricks - and fast. If he doesn’t, he could end up dead.

Jake Foreman's day starts off badly and gets worse, culminating in being thrown out of his own house by a bunch of squatters. What then follows shows just how Jake's life, once reasonably settled, takes a very different turn. Jake is very much a man's man, and yet there is an air of vulnerability to him which I found quite endearing and I warmed to his character, sometimes with a sense of incredulity at some of his smart moves, but throughout the book I found I was smiling at his escapades. He's a bit hapless really, getting into situations that he sort of falls into without thinking, and I think that's what makes Smart Moves such an enjoyable read as you are never quite sure what is going to happen next in Jake’s eventful, mixed up life.

I read Smart Moves quite quickly, it's an easy read in many ways, and yet, is filled with some wry observations about the sheer doggedness of life, and the fact that Jake keeps going regardless is part of the story’s overall charm. There’s lots going on, and as the story gets more and more sinister it’s interesting to see just how Jake’s character develops and becomes stronger and more confident.

The author writes well and has created in Jake Foreman a memorable and likeable character who I could quite easily see in future novels. The distinctive easy style certainly entertains from its light hearted beginning to its satisfying ending.

Adrian Magson the author of 22 crime novels and spy thrillers, featuring Harry Tate, Inspector Lucas Rocco and Gavin and Palmer. He writes regularly for national and international magazines and has also published a self help book for writers. He lives in the Forest of Dean. 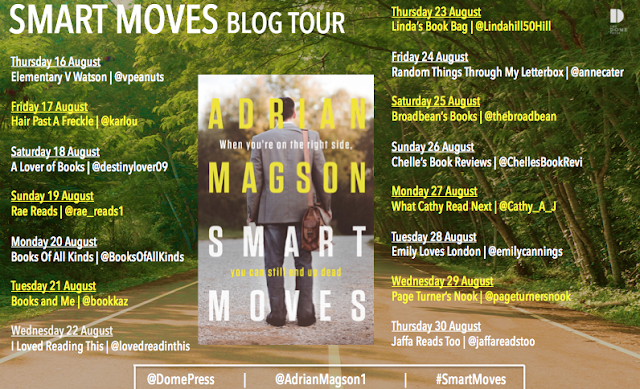