What happens when you fall in love with the wrong person?

The consequences threaten to be far-reaching and potentially deadly. Bone Deep is a contemporary novel of sibling rivalry, love, betrayal and murder. It is a dual narrative, told in alternative chapters by Mac, a woman bent on keeping the secrets of the past from her only son, and the enigmatic Lucie, whose own past is something of a closed book. Their story is underpinned by the creaking presence of an abandoned water mill, and haunted by the local legend of two long-dead sisters, themselves rivals in love, and ready to point an accusing finger from the pages of history.

Told in alternating and quite compelling chapters Bone Deep exposes those deep and dark family secrets which have lain hidden for far too long. Mac, an elderly historian, is obsessed by an old story of two sisters whose fate seems to be intertwined with that of the old water mill which adjoins Mac's rural property. When Lucie is forced to flee her home she takes refuge as Mac's Girl Friday but soon the secrets which she is also keeping threaten to embroil the pair of them in some really dark goings on.

I really loved Bone Deep from the very beginning. There is a lovely mix of atmosphere; from light through to dark and all shades in between, and as the story gets deeper and deeper so the twists and turns in the story become ever more compelling. The author writes really well and has captured perfectly the rather creepy atmosphere of something not quite as it should be and there is a real sense of unease as the story starts to get deeper and deeper into the intertwining lives of Mac and Arthur her grown up son, and also of the complicated sibling dynamics which exists between Lucie and her younger sister, Jane. To say too much about what happens to them all and of how the story progresses would really be to give the game away, and Bone Deep is one of those clever psychological thrillers which should be read with no spoilers from me.

This is a clever and suspenseful story which plays havoc with your imagination and haunts your dreams for days after finishing the story. 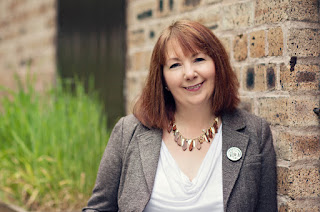 Sandra Ireland was born in Yorkshire, lived for many years in Limerick, and is now based in Scotland. She began her writing career as a correspondent on a local newspaper but quickly realised that fiction is much more intriguing than fact. She returned to higher education her 40s, to study for undergraduate and postgraduate degrees at Dundee University. In 2016 she won Creative Scotland funding for a residency at Barry Mill, a National Trust for Scotland property. Her debut novel was Beneath the Skin (Polygon, 2016). She lives in Carnoustie.