A jumble of entries, written in different hands, different languages, and different times. They tell of a rumour. A shadow. A killer.

The only interest that Oxford Professor Charles Meredith has in the diaries is as a record of Hungarian folklore ... until he comes face to face with a myth.

For Hannah Wilde, the diaries are a survival guide that taught her the three rules she lives by: verify everyone, trust no one, and if in any doubt, run.

But Hannah knows that if her daughter is ever going to be safe, she will have to stop running and face the terror that has hunted her family for five generations.

And nothing in the diaries can prepare her for that.


The String Diaries is one of those unusual stories which focuses your mind on the unbelievable and causes you to suspend belief from what you know to be good and true. It starts off in a visceral and quite terrifying way with Hannah Wilde, her husband and small daughter apparently on the run from danger and persons unknown. Hannah’s fear is palpable and her instinctive need for survival makes her distrustful not just of her surroundings but also of the circumstances in which she finds herself.

I must admit that this sort of story is a bit out of my comfort zone but I do so like clever writing which takes me away from the ordinary and prompts me into thinking about something which is just a little bit different. There is no doubt that this is a praiseworthy debut for a new writer. The imaginative way the reader is drawn into a world of myths and shadows, alleged killers and uncanny shape shifters is to be commended.

To disclose more about this cleverly produced story would risk the wrath of future readers as there is no other way to talk about it but to reveal both plot and malice and that would be unfair.

So, if you want a thriller that keeps you on the edge of your seat, which makes you look up from reading and wonder where you are, or if you just like a rollicking good story with a well driven plot and satisfying conclusion they you could do worse than give this one a try. 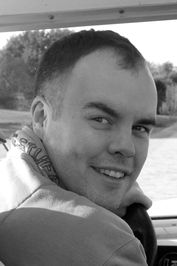 Stephen Lloyd Jones grew up in Chandlers Ford, Hampshire, and studied at Royal Holloway College, University of London. He now lives in Surrey with his wife, three young sons and far too many books. His first novel,The String Diaries, is available in paperback from Headline.

His second novel, Written in the Blood was published by Headline in November 2014.