H is for Hawk

From the age of seven, Helen Macdonald was determined to become a falconer. She learned the arcane terminology and read all the classic books, including TH White’s tortured masterpiece, The Goshawk, which describes White’s struggle to train a hawk as a spiritual contest. When her father dies and she is knocked sideways by grief, she becomes obsessed with the idea of training her own goshawk. She buys Mabel for £800 on a Scottish quayside and takes her home to Cambridge. Then she fills the freezer with hawk food and unplugs the phone, ready to embark on the long, strange business of trying to train this wildest of animals. 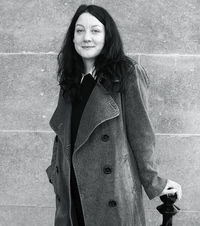 Helen Macdonald is a writer, poet, illustrator, historian and affiliate at the Department of History and Philosophy of Science at the University of Cambridge. Her books include Falcon (2006) and Shaler’s Fish (2001). H is for Hawk won the 2014 Samuel Johnson Prize for Non-Fiction.

Email ThisBlogThis!Share to TwitterShare to FacebookShare to Pinterest
Labels: Costa Book of the Year