Social Media Blast ~ The Man on the Street by Trevor Wood

Thrilled to be hosting a stop on this social media blast

Introducing the most unforgettable investigator of 2020. Gritty, Newcastle-set crime for fans of Ian Rankin and Val McDermid.

It started with a splash. Jimmy, a homeless veteran grappling with PTSD, did his best to pretend he hadn't heard it - the sound of something heavy falling into the Tyne at the height of an argument between two men on the riverbank. Not his fight.

Then he sees the headline: GIRL IN MISSING DAD PLEA. The girl, Carrie, reminds him of someone he lost, and this makes his mind up: it's time to stop hiding from his past. But telling Carrie, what he heard - or thought he heard - turns out to be just the beginning of the story.

The police don't believe him, but Carrie is adamant that something awful has happened to her dad and Jimmy agrees to help her, putting himself at risk from enemies old and new.

Jimmy Mullen lives on the streets of Newcastle with his four-legged companion, who is aptly named, Dog. That the streets are often a dangerous place to live goes without saying, but amongst some of his more deadly neighbours, Jimmy finds that there are a few that he can trust. Jimmy ticks along, living from moment to moment, but luckier than most because, although homeless, Jimmy has a small army pension to help him survive. A veteran of the Falklands conflict, Jimmy is no shrinking violet, however, the trauma of his wartime experience has left him with PTSD which has wrecked his life in more ways than one. When, late one night, Jimmy witnesses a crime taking place, it opens up a set of frightening circumstances which will see this unusual protagonist become drawn into a dark and deadly game of catch me , before I catch you.

Well paced, with a decidedly dark edge, this gritty crime debut gets off to a cracking good start as it introduces us to people who very quickly become people we care about. Jimmy is an interesting character, quietly observant one minute, and then helpless in his struggle against the demons which so often threaten to engulf him, that society is less than sympathetic to his plight is particularly heartbreaking.

The crime/mystery at the heart of the novel is an interesting one and the author keeps the tension cranked up to high from the very first page and shows the plight of the homeless in our cities in a scarily realistic way. If you like gritty crime novels with a protagonist who very quickly gets under your skin, so that you start to care what happens to him, then The Man on the Street is a great example of crime fiction at its best.

The Man on the Street is a commendable debut novel. I look forward to seeing what this talented writer comes up with next.

Trevor Wood has lived in Newcastle for twenty-five years and considers himself an adopted Geordie. He’s a successful playwright who has also worked as a journalist and spin-doctor for the City Council. Prior to that he served in the Royal Navy for sixteen years. Trevor holds an MA in Creative Writing (Crime Fiction) from UEA. The Man on the Street is his first novel. 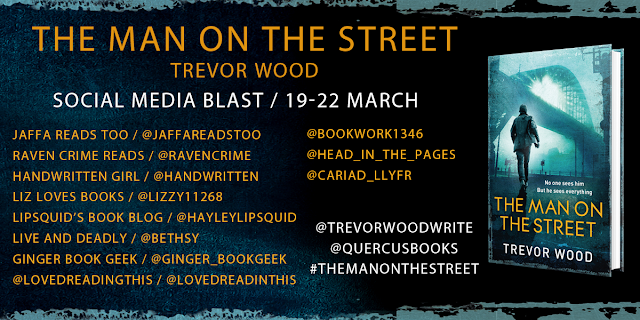