Social Media Blast~ A Body in the Bookshop by Helen Cox

Delighted to be part of this  Social Media Blast

Librarian Kitt Hartley and her friend Evie Bowes thought their life had gone back to normal after the shocking events of Murder by the Minster. Then DI Malcolm Halloran breaks some bad news: DS Charlotte Banks has been suspended from duty, on suspicion of assaulting the suspect in the burglary of a local bookshop.

Evie wants justice for Charlotte, who she is sure was not the attacker, and how could any self-respecting librarian turn down the chance to find missing rare books? The two friends team up once again to investigate the rarefied world of York's bookshops and antiques dealers and find out just who has framed their friend.

But Kitt and Evie will soon learn that there are some books people will kill for - will this story have a happy ending?

Kitt Hartley is most usually found tucked away in the library but occasionally her sleuthing skills are needed and never more so than in this second book in the series which sees Kitt, and her friend, Evie drawn, into a dark mystery which involves none other that DS Charlotte Banks, a police officer who we met in book number one in this cosy crime series. That the same characters are evident in this second book makes this a real coming together of old friends, and I especially enjoy how the author brings them all to life in such a realistic way.

In this latest novel, DS Banks is suspected of the assault of a suspect, and has been arrested and reported to the Professional Standards Department. It is now up to Kitt, Evie, and their old friend DI Malcolm Holloran, to prove Charlotte's innocence. This is easier said than done and, of course, as with all crime fiction, the investigation is never going to be straightforward however, this intrepid group of people are determined to do all they can to prove Charlotte's innocence. It's interesting to see more of Evie and Charlotte's friendship developing alongside that of Kitt and Malcolm Holloran.

The story moves along at an interesting pace and it is entertaining to see that, as in the first book, there is never a dull moment for any of the characters. A Body in the Bookshop is fun, light hearted, cosy crime mystery, and is one of those entertaining crime series which would lend itself perfectly to a Sunday night TV drama.

Helen Cox is a Yorkshire-born novelist and poet. After completing her MA in creative writing at the University of York St. John Helen wrote for a range of magazines and websites as well as for TV and radio news. Helen has edited her own independent film magazine and penned three non-fiction books. Her first two novels were published by HarperCollins in 2016. She currently hosts The Poetrygram podcast and works for City Lit, London. Helen’s new series of cosy mysteries stars librarian-turned-sleuth Kitt Hartley, and is set in York. Helen’s Mastermind specialism would be Grease 2 and to this day she adheres to the Pink Lady pledge. 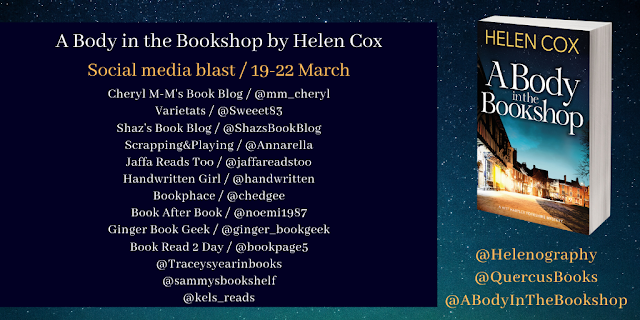