Blog Tour ~ When Life Gives You Lemons by Fiona Gibson

Sometimes life can be bittersweet . . .

Between tending to the whims of her seven-year-old and the demands of her boss, Viv barely gets a moment to herself. It’s not quite the life she wanted, but she hasn’t run screaming for the hills yet.

But then Viv’s husband Andy makes his mid-life crisis her problem. He’s having an affair with his (infuriatingly age-appropriate) colleague, a woman who – unlike Viv – doesn’t put on weight when she so much as glances at a cream cake.

Viv suddenly finds herself single, with zero desire to mingle. Should she be mourning the end of life as she knows it, or could this be the perfect chance to put herself first?

When life gives you lemons, lemonade just won’t cut it. Bring on the gin!


Viv's life seems to be tootling along quite happily and despite being plagued by the night sweat and hot flushes of impending menopause, Viv hopes that she will come through this time in her life with her sanity, and family, intact. However, in the midst of her own uncertainty, Viv discovers that her husband of twenty five years has been having an affair with a much more svelte and sophisticated colleague. With everything around her in disarray, Viv is devastated but keeping her family safe is so important but then she also discovers that being single suddenly has its advantages. With the chance to get her life back on track,Viv starts to put herself first with interesting consequences.

I've really enjoyed getting to know Viv, every fifty-something woman, I think, will be able to identify with here, her angst about work, home and love certainly ring true. She's a great personality, and with her friends there when she needs them, Viv starts to gain in confidences and assurance. There's some genuinely funny moments which made me smile and the cast of interesting characters who come and go in Viv's life are a lively bunch and add some lovely light and shade to the story, but it is Viv's relationship with her friend, Penny, which is rather special.

The author does this genre so well and I know that whenever I pick up a Fiona Gibson book I won't be disappointed. Her ability to get right into the heart of her characters always brings her stories to life in a lovely light hearted way. When Life Gives You Lemons is a great feel good read and is perfect way to pass an afternoon of self isolation.

Fiona was born in a youth hostel in Yorkshire. She started working on teen magazine Jackie at age 17, then went on to join Just Seventeen and More! where she invented the infamous ‘Position of the Fortnight.’ Fiona now lives in Scotland with her husband Jimmy, their three children and a wayward rescue collie cross called Jac. 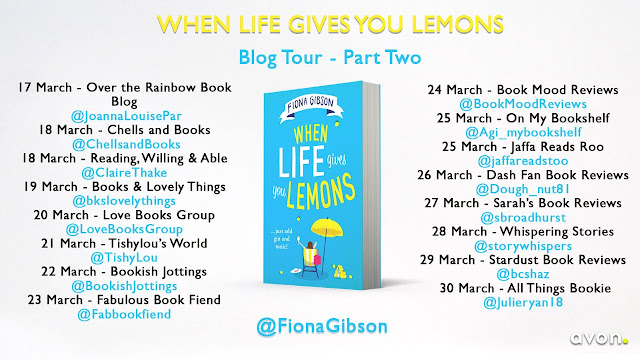