When Hubert Larnaudie invites some fellow residents of his Parisian apartment building to drink an exceptional bottle of 1954 Beaujolais, he has no idea of its special properties. The following morning, Hubert finds himself waking up in 1950s Paris, as do antique restorer Magalie, mixologist Julien, and Airbnb tenant Bob from Milwaukee, who's on his first trip to Europe.

After their initial shock, the city of Edith Piaf and An American in Paris begins to work its charm on them.

But, ultimately, they need to work out how to get back to 2017. And the key lies in a legendary story of the vineyards of Chȃteau Saint-Antoine..

Wouldn't it be wonderful if you could take a drink from a vintage bottle of wine and cross through time, back to the glorious era in which the grapes were harvested and bottled, and that's just what happens in this lovely story which takes us, thanks to a vintage bottle of 1954 Beaujolais, back in time to the Paris of the 1950s, and to all those lovely people who made this vibrant post-war city such a joyous place to live.

The story starts with a disappearance, and then whisks us forward into 2017 Paris to meet up with four eccentric neighbours who find themselves living at 18 Rue Edgar-Charellier. This disparate group of characters who, collectively have very little in common will, in the course of the story, have the adventure of a lifetime.

This is such a wonderfully quirky story that it is easy to just sit back and enjoy just how it all unfolds. To allow the author's clever writing to transport you back to a bygone time is such a joy, especially as we spend time in Paris when it was a less frenetic city. Back to a gentler time when there were tiny bistros tucked away and fruit sellers on street corners who had time to stop and chat. It was also a city where the great and the good loved to visit, so it's wonderful to have the fleeting opportunity to meet up with the likes of Salvador Dali, Audrey Hepburn, Hubert de Givenchy and Edith Piaf.

Vintage 1954 is a hidden gem and the most perfect summer read, especially if you are visiting Paris but it would work equally well sitting in the garden, preferably with a glass or two of Beaujolais close to hand 🍶


Antoine Laurain is a wine-lover, journalist, and antique collector. Born and bred in Paris, he is the author of bestselling novels The President’s Hat (a Waterstones Book Club pick) and The Red Notebook. His books have sold over 155,000 copies in English and Antoine’s work has been adapted for French TV, translated into 14 languages, and won the Prix Relay des Voyageurs amongst others. 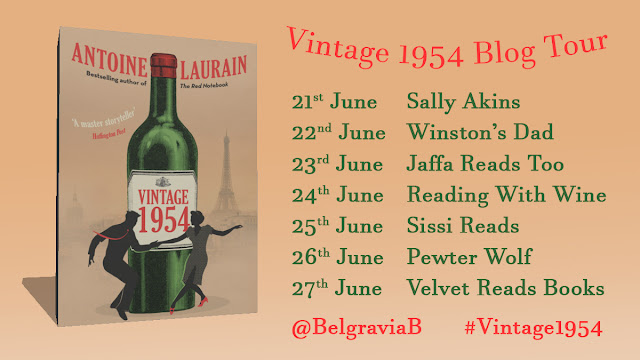