A sensual tale of romance and nostalgia, Concerto illustrates the pain of lost love and the heroine determined to put things right

When Catriona Drouot, a young music therapist, honours an opera diva's dying request to help her son, Umberto Monteverdi, recover his musical gift, she knows it will be a difficult assignment. She had shared a night of passion with the once-celebrated composer ten years before, with unexpected consequences.

The extent of her challenge becomes apparent when she arrives at her client's estate on the glittering shores of Lake Como, Italy. Robbed of his sight by a near fatal car accident, the man is arrogant, embittered and resistant to her every effort to help him. Still, Catriona sings a siren's call within him that he cannot ignore.

Caught up in the tempestuous intrigues at Umberto's Palladian mansion, Catriona discovers that her attraction to the blind musician is as powerful as ever. How can she share what she has hidden from him for the past decade? Soon she realises that hers is not the only secret that is rippling uneasily below the surface. Dark forces haunt the sightless composer, threatening his life - for the second time.

Concerto is a sensual and romantic story of lost love and forgiveness, destiny and difficult choices, and of a heroine determined to put things right at last.

Dottoressa Catriona Drouot is given the task of using her unique skill as a music therapist to help maestro, Umberto Monteverdi, rediscover his gift for composing. Faced with trepidation, Catriona, approaches this assignment, as she would any other patient, except, in this case, Umberto is no ordinary patient as he and Catriona once shared a night of passion some ten years earlier. Umberto's mental health has suffered since a near fatal accident left him with sight problems and he has grown to be distrustful and belligerent and, it must be said, rather difficult to manage. Catriona needs to use every ounce of her skill to try to bring Umberto back from the brink of despair.

What then follows is a beautifully written and insightful story about the discovery of lost love, and of the siren song of two souls who are bound together. The musical theme which runs like a silken symphony throughout the novel adds a fascinating dimension and yet, it is the passion which fairly sizzles between the two main characters which gives the story its heart and soul.

The author writes this type of romantic fiction to a really high standard and brings such life to her characters that they fairly leap off the page. I felt as though I walked alongside Catriona as she explored the beautiful Villa Monteverdi, with its glorious scent of lemon blossom, jasmine and rose and listened to the gentle lap of the waters around Lake Como. Umberto is very much a macho character and yet, his struggles with mental health, and his anguish at losing his eyesight, give him such a poignant vulnerability that it quite broke my heart to see him so damaged.

Tinkling with music and suffused with sumptuous descriptions of food and wine, beautiful houses and stunning sunshine, Concerto is an epic love story, which brings alive burning desire and sizzling  passion. It quite took my breath away ♡ 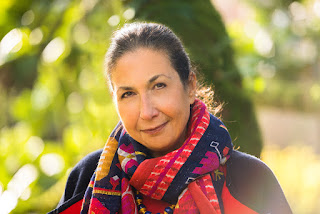 Having already had huge success as one of the UK’s leading romance authors with total sales of over 130k,Concerto follows the award-winning success of Hannah Fielding’s previous novels Aphrodite’s Tears, Burning Embers, Echoes of Love, Masquerade, Legacy and Indiscretion. Echoes of Love won Romance Novel of the Year at the IPB Awards in 2012, Burning Embers was Amazon’s book of the month in 2011, and Hannah’s novels have been translated into 13 languages. With its spectacular setting and deep emotional drama, Concerto will appeal both to fans of her backlist, as well as lovers of atmospheric travel writing including Santa Montefiore, Penny Vincenzie, Victoria Hislop and Lucinda Riley.

Egyptian by birth Hannah is fluent in French, English and Arabic and has lived all over the world. She currently lives between her writing retreat in the South of France and her rambling family home in Ireland. Hannah’s grandmother, Esther Fanous, was the revolutionary feminist writer in Egypt during the early 1900s and helped found the Women's Wafd Central Committee in 1920.