It begins with an abduction. The routine of a family shopping trip is shattered when Michelle Spivey is snatched as she leaves the mall with her young daughter. The police search for her, her partner pleads for her release, but in the end…they find nothing. It’s as if she disappeared into thin air.

A month later, on a sleepy Sunday afternoon, medical examiner Sara Linton is at lunch with her boyfriend Will Trent, an agent with the Georgia Bureau of Investigation. But the serenity of the summer’s day is broken by the wail of sirens.

Sara and Will are trained to help in an emergency. Their jobs – their vocations – mean that they run towards a crisis, not away from it. But on this one terrible day that instinct betrays them both. Within hours the situation has spiralled out of control; Sara is taken prisoner; Will is forced undercover. And the fallout will lead them into the Appalachian mountains, to the terrible truth about what really happened to Michelle, and to a remote compound where a radical group has murder in mind…

It's been such  a thrill to be be reacquainted with Will Trent and Sara Linton and as always, the story lives up to every one of my expectations. The Last Widow sees Will and Sara as close as ever as a couple, and yet, in this story, because of dramatic circumstances, they spend very little time together. However, such is the strength of their relationship, that you feel the extraordinary emotional pull of their connection even when they're apart.

The Last Widow bears all the trademarks of this author's exceptional writing talent with an opening which had me, quite literally, on the edge of my seat, and as the excitement builds there is never a moment when the story doesn't leave you reeling.  The plot is very topical and, it must be said, rather brutal both in terms of its characterisation and in the way that the author gives us a very plausible situation, highlighting, in a frighteningly realistic way, the toxic rise of hatred and prejudice.

It's perfectly possible to read The Last Widow as a standalone story as the author includes enough information about her main characters so you are able to invest in their situation but of course, this is such a fabulous series that it's better to have followed both Sara Linton's story in the Grant County series, and likewise, start at the beginning of the Will Trent series, and in that way you can apprentice the joy of watching the characters develop in confidence, and of the sheer excitement in experiencing their collective crime dramas.

I raced through The Last Widow over a couple of days simply because I couldn't put the story down without wanting to discover just how this tense, taut and fabulous thriller eventually played out.

I hope it won't be too long before we meet up again with Sara and Will, the ending certainly lends itself to another exciting continuation, hopefully in Will Trent #10 😊

Karin Slaughter is one of the world's most popular and acclaimed storytellers. Published in 120 countries with more than 35 million copies sold across the globe. her 19 novels include the Grant County and Will Trent books, as well as the Edgar-nominated Cop Town and the instant Sunday Times bestselling novels, Pretty Girls, The Good Daughter, and Pieces of Her. 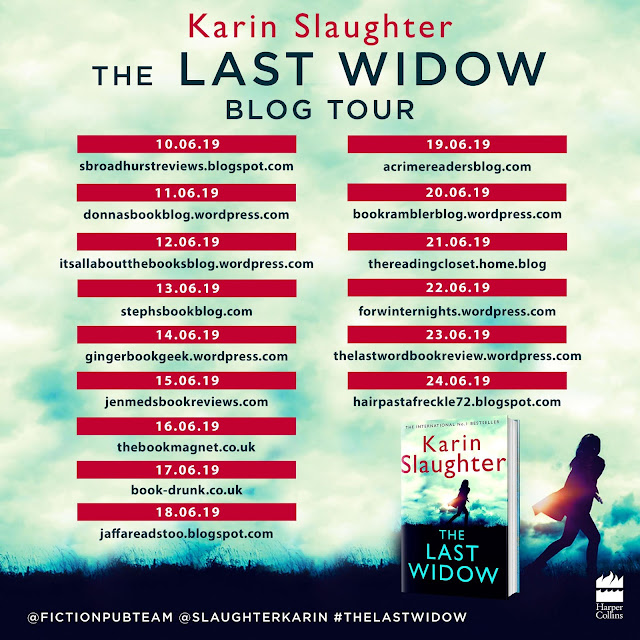