Review ~ Fight Back by Anna Smith

Gangster Kerry Casey has fought her way to the top of the Glasgow crime scene. But can she stay there?

Kerry Casey is now a fully-fledged gangland boss. With her business partner Sharon and her wily lawyer Marty at her side, she is busy ridding her organisation of the drug-dealing, people-trafficking scum her dead brother Mickey got them involved with. But her great dream is still to take the Caseys straight.

Her plan to turn her organisation around hinges on building a property empire in Spain. But Kerry has some deadly rivals - in Glasgow, on the Costa del Sol, and even further afield. They will never believe she has what it takes to defend her turf, and they won't rest until the Caseys are destroyed.

When her enemies strike at the heart of the Casey family, Kerry must prepare for the fight of her life - for her business, her friends and her own survival.

I've come rather late to this gritty crime series but they do say better late than never, so I've just spent a tense few days in the company of gangland boss, Kerry Casey, whose ambition to clean up the 'family business' causes her some problems, especially as the Casey's reputation for shady business dealings goes before them. With the help of her business partner Sharon and her lawyer Marty, Kerry is determined to succeed in bringing the business back on track. However, that's easier said than done, and Kerry has to deal with a lot of aggression from different organisations who don't share the same philosophy.

Filled with a whole range of strong and determined characters and moving between Glasgow and the Costa del Sol, Fight Back is a lively story!  Filled with all the grit, crime and treachery you would expect from gangland noir, and with a strong minded and determined woman in charge, the attention is certainly focused on what it's like to be running a complicated family business in a tough and sometimes, vicious world.

The first Kerry Casey book, Blood Feud certainly gets the series off to a cracking start and the dark and complex themes are definitely continued in this second visit to Glasgow's ganglands. As with any series it's always best to start at the beginning that way you get to learn of all the extra little side stories which can so easily confuse if you've not followed from the start. However, having said that, it is still perfectly possible to read, and thoroughly enjoy, Fight Back as a standalone story. 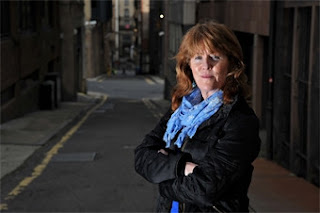 Anna Smith has been a journalist for over twenty years and is a former chief reporter for the Daily Record in Glasgow. She has covered wars across the world as well as major investigations and news stories from Dunblane to Kosovo to 9/11. Anna spends her time between Lanarkshire and Dingle in the west of Ireland, as well as in Spain to escape the British weather.