The author in my spotlight is ...Joanna Hickson 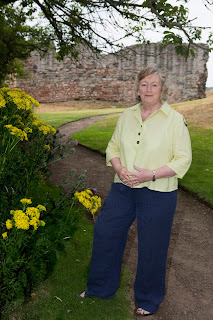 Today Joanna is talking to us about her latest historical novel

The First of the Tudors - Published December 2016 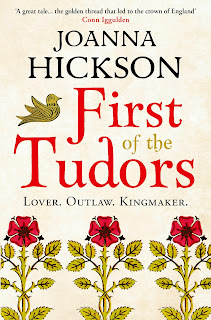 Jasper Tudor, son of Queen Catherine and her second husband, Owen Tudor, has grown up far from the intrigue of the royal court. But after he and his brother Edmund are summoned to London, their half-brother, King Henry VI, takes a keen interest in their future.

Bestowing Earldoms on them both, Henry also gives them the wardship of the young heiress Margaret Beaufort. Although she is still a child, Jasper becomes devoted to her and is devastated when Henry arranges her betrothal to Edmund.

He seeks solace in his estates and in the arms of Jane Hywel, a young Welsh woman who offers him something more meaningful than a dynastic marriage. But passion turns to jeopardy for them both as the Wars of the Roses wreak havoc on the realm. Loyal brother to a fragile king and his domineering queen, Marguerite of Anjou, Jasper must draw on all his guile and courage to preserve their throne – and the Tudor destiny…

Hi Joanna, Jasper Tudor is the main protagonist in First of the Tudors; tell us about him and why you decided to tell his story.

First of the Tudors is not a sequel to my previous novels The Agincourt Bride and The Tudor Bride but it may be seen as a logical development from them. It was always my intention to explore the Tudor dynasty from its very roots and with it, to portray the progression of English history through the fifteenth century and the Wars of the Roses.

It is an extraordinary fact that the name Tudor was unknown in England before 1450 and yet thirty-five years later there was a man of that name on the English throne. The reasons for this are twofold. Firstly a young soldier was enlisted in Lord Hungerford’s retinue for Henry V’s expedition to France in 1415 under the name Owen ap Meredith ap Tudur, naming his father and grandfather in the Welsh patronymic form of identification. Later English scribes shortened the name to Owen Tudor but it might easily have been shortened to Owen Meredith, with historic consequences! Secondly, this same Owen Tudor later became a servant in the household of the child-king Henry VI and well known to his young mother, Queen Catherine de Valois, widow of King Henry V, the celebrated victor of the Battle of Agincourt. So began arguably the most intriguing and romantic ‘misalliance’ of medieval history and one that gave birth to at least four children. Jasper was the second child of this union and the one who was responsible for ensuring the destiny of the Tudor dynasty. Just the name Jasper, unusual and probably unique among the nobility of the time, would have been enough to intrigue me but add that to the dramatic events surrounding his see-saw life, his own clandestine romance and his unswerving loyalty to his unfortunate half-brother King Henry VI and I believe you have an irresistible narrative.


In this novel Jasper spends time in Wales. In researching the book did you walk in his footsteps, to the places he once visited and did you have a favourite place?

I certainly did visit most of the places he frequented but I’m not sure that I could choose one favourite. After his half-brother the king made him Earl of Pembroke, Jasper made a home for himself at Pembroke Castle in the far west of Wales and of course I went there. It is an enormous, sprawling fortress, established soon after the Norman Conquest and developed and extended over the next four hundred years by its various owners, including Jasper himself. History records it as the birthplace of the first Tudor king, Henry VII, and tradition put his birth in a particular tower that is presently named after him. However, I begged to differ for very good reasons, which you will find in the novel and which may have turned out to be justified. I am saying no more for fear of spoilers!

In contrast a significant portion of the first part of the novel takes place on a farm situated on the shores of Tremadog Bay, just north of present-day Barmouth and while there is a lovely old mansion called Cors-y-Gedol on the site of this farm today, I used another, older farmhouse up in Snowdonia called Tŷ Mawr Wybrnant as the blueprint for my setting. It belongs to the National Trust now so can be visited by the general public and gives a really good idea of the harsh life and unremitting toil of the farming families of that time. If I had to I would probably cite this as my favourite and most inspirational place on my Jasper research list.

I enjoyed reading of Jasper’s connection with his sister-in-law, Margaret Beaufort, but his relationship with Jane Hywel is quite special. How did you bring her character to life with so little documented information about her?

This is where my preferred description of what I write as ‘creative history’ rather than ‘historical fiction’ comes into play. I do extensive research on the characters I choose to bring to life but some of them require more creation than others! There is no doubt that a woman called Jane Hywel did exist and was well known to Margaret Beaufort, who employed her to run the nursery of her baby grandson Prince Henry, later to become King Henry VIII. From that miniscule mention in a historical source however I have created a whole and, I hope, believable character in Jane (or Sian), distantly related to Jasper through her father Hywel Fychan, another minor character only briefly mentioned in history, and in The Tudor Bride, as a Welsh cousin brought into Queen Catherine’s household by Owen Tudor. I do this because I don’t want to concentrate entirely on the court and nobility but there is little record of the actions of commoners in historical sources, for the very good reason that they were mostly illiterate and therefore left no written material. I want all medieval life to be in my novels, not just the part of it that we glean from letters, chronicles and court and parliamentary rolls.

Mixing historical fact with fiction must be quite a challenge. How do you get the balance right without compromising on authenticity?

If I do get the balance right it’s because I try to put myself in the positions in which I put my characters. I guess that’s what all writers do, whether they’re writing contemporary or historical fiction. Of course for the latter it means you must immerse yourself in the life of the times in which your tale is set and that means making sure that you know the differences between life as it was led then and as we lead it now. So in my imagination I spend a lot of time in the fifteenth century, dressing as they do, eating as they do and thinking as they do, whether they be nobles or nobodies. It’s fun when the characters take you over and tell you what they would do next in the situation you have put them in!

Whilst you are writing you must live with your characters.

How do you feel about them when the book is finished?

Bereft – that’s why I keep dragging back characters from my previous books into those that follow.

Are they what you expected them to be?

No because they keep going in directions I didn’t expect them too and improving the story in the process. And do you have a favourite character? I think it’s always the one I am writing about at the time and as I am continuing the Tudor story in my next novel I can stay with my present favourite for a while, which is Jasper of course! Although another character is beginning to take over as I progress through the century... No prizes for guessing who that is! Also I think I will always love Mette, the narrator of my first two novels – and readers will soon find that she makes a guest appearance in First of the Tudors.

What can we expect next from you?

More about Joanna can be found by clicking here

My thoughts about First of the Tudors..can be found by clicking here

My thanks to Joanna for her insightful answers to my questions. Joanna, it's been a pleasure to have you spend time with us today.

Thanks also to Jaime at Harper Collins for her help with this interview.