Jaffareadstoo is thrilled to be part of the Quercus Summer Reading Group and here's the second book in the Summer Read choices.

Florrie Buckley is an orphan, living on the wind-blasted moors of Cornwall. It's a hard existence but Florrie is content; she runs wild in the mysterious landscape. She thinks her destiny is set in stone.

But when Florrie is fourteen, she inherits a never-imagined secret. She is related to a wealthy and notorious London family, the Graces. Overnight, Florrie's life changes and she moves from country to city, from poverty to wealth.

Cut off from everyone she has ever known, Florrie struggles to learn the rules of this strange new world. And then she must try to fathom her destructive pull towards the enigmatic and troubled Turlington Grace, a man with many dark secrets of his own.

When the story opens, Florrie Buckley is a feisty thirteen year old living with her beloved Nan in a small village community in a remote Cornish valley. Like the rest of the folks who live there, they eke out a meagre living as best they can, but times are hard, so when Florrie is given the opportunity to earn an extra sixpence helping out at a function at a grand house in Truro, she feels that, regardless of her Nan's disapproval, it would be foolish to pass up the opportunity. Watching the glittering people dance and twirl, Florrie experiences a glimpse of a life she has never known, but then an unexpected meeting with Sanderson and Turlington Grace, two aristocratic young men, will change Florrie's life forever.

Flitting between the rugged Cornish landscape and the grand salons of Victorian London, Florrie embarks on an adventure, the like of which she could never have imagined but which will test her mettle to the limit.

What I love about good historical fiction, and believe me, this is good historical fiction, is that it has the power to take you completely out of the world you know and transports you instantly to another time and place. Such is the appeal of this story that, very quickly, you become as one with Florrie and as her circumstances change beyond all recognition, you start to experience the vagaries of Victorian society life through her eyes.

I loved the easy style of writing and the way that the author gives us such a feisty heroine who is brave and bold and full of such sparkling wit and good humour. The other characters are equally fascinating, particularly the Grace family, who are so much a product of their time, that it becomes a real delight to watch as all their faults and foibles are laid bare.

The idiosyncrasies of Victorian society are uncovered in this story of hidden family secrets which grips from the beginning and doesn't let up until Florence Grace's story is told.

It's a hefty read, coming in at 550 pages but as I became immersed in the story I found that the narrative never dragged along, I was never bored or disillusioned, I was just enchanted by a really good story, well told.


A perfect summer read, either curled up in your favourite garden chair or lounging by a swimming pool, preferably somewhere hot and sunny...

Best Read With ...Creamy porridge and the sharp clear taste of blackberry tea, purple as twilight.. 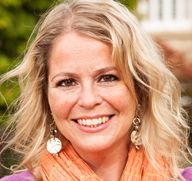 Tracy Rees was born in South Wales. A Cambridge graduate, she had a successful eight-year career in nonfiction publishing and a second career practising and teaching humanistic counselling. She was the winner of the Richard and Judy Search for a Bestseller Competition and the 2015 Love Stories 'Best Historical Read' award.

Here's my photograph of Florence Grace flourishing in my summer garden 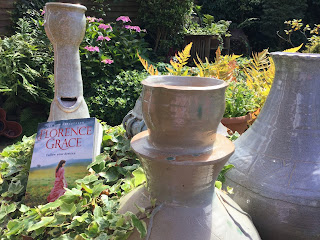