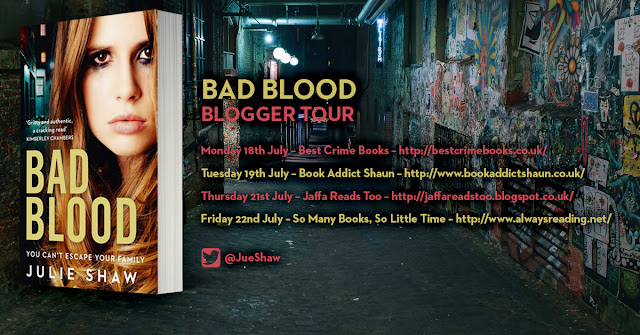 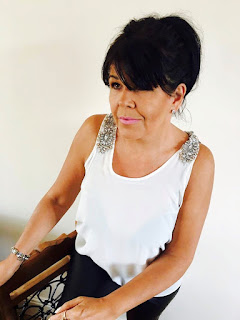 Welcome to Jaffareadstoo, Julie. Tell us a little about yourself and what got you started as an author?


I’m 52 years old with two grown up children. I have six grandchildren (and hoping that that’s the lot!) but thankfully I have a very young, modern attitude and a bucket load of patience! I have been writing since I was a little girl really and that stemmed from my love of reading. If I was well behaved, I got a new book every week and I soon learned that I could escape reality whenever I wanted by simply opening some pages. Whenever I couldn’t get a book, I would write my own stories and I had my first story serialized in a local newspaper when I was just nine years old.

Will you explain to us a little more about the plot of Bad Blood without giving too much away?

Bad Blood really concentrates on complicated relationships within families. A single mother who wants to remain young and carefree puts her son and daughter to one side as she concentrates on finding and keeping a man. The man has many other women and only uses them to serve his needs. The children suffer in the most unusual ways and pay the ultimate price for their mother’s lack of concern. Despite all of that, I think the underlying theme is – how far would you go for your family?

I know that you base your novels on things that have, perhaps, happened within your family, do you find this a help... or a hindrance?

It’s a definite help. I can understand and write about the actual raw emotion that accompanies these tragedies without having to research or second guess. I’ve lived almost everything I write about.

Actually, I used to be very much a ‘see where it goes’ kind of writer, but my friend and co author, Lynne Barrett–Lee, would absolutely despair of me! She is a dyed in the wool plotter. And I don’t just mean she will have me sketch out a rough outline, oh no, she has taught me that the easiest way to write is always to have a chapter by chapter outline, a full story before we even start! I do have a moan now and again, but secretly I’m so pleased she now has me doing this without thinking. It makes the whole process so much easier J

What do you consider to be your strongest points as a writer?

I believe my strongest points are that I find it easy to write believable dialogue, naturally. I don’t know why, I can just hear the natural rhythm of speech as I write and I don’t really have to think about it. I think I am also an emotive writer, which apparently is also a good thing J

Which was the first book (of any kind) to make a strong impression on you – and why?

The first book that had a very powerful effect on me was called ‘They Put Me Inside’ by Tony Grestone. It was a memoir about a young lad from an impoverished background who went to prison for petty crimes. The book told the story of his struggles in prison and how he felt he didn’t fit in, anywhere. Finding religion saved his soul and his life ultimately, and it was this – underdog comes good, theme that affected me so much. It left me with a lifelong desire to help those less fortunate who wanted to change things.

And finally...If your life was book what would be the title?

Oh dear, that’s a tough one! Against the odds? I once wrote a song that I guess was biographical, it was called When is it my turn? It was about a girl who was happy to listen to her girlfriends bemoan their love lives etc. She would make them feel better and build them up, and even though she wanted nothing more than to be loved herself, she put it to one side every time so that she wouldn’t be happy if her friends weren’t. Sad eh? J

It’s 1981 and seventeen-year-old Christine is about to give birth to her son. When her family throw her out, Christine has the biggest fight of her life to bring up her son safe on the infamous Canterbury Estate in Bradford, rife with crime, alcohol and drugs, a place where family is everything and nothing.

It's Friday evening on the Canterbury Estate in Bradford and Christine, who's been rushed to hospital by her friend, Josie, is on the maternity ward giving birth. She's 17 and terrified. Not just of the pain, which is ripping her in two, but because she knows that once the baby arrives, her family is never going to speak to her again.

My thoughts about Bad Blood..

A gritty northern saga with more than a hint of seriousness is the basis for this novel which starts in 1981 when seventeen year old Christine has her baby boy. This is not the happy event is should be, and as the chasms which open in Christine's family threaten to engulf her, you can't help but be drawn into a story that abounds with tough northern grit. The ties that bind families together are not always the most meaningful or reliable, and Christine, growing up in her dysfunctional family has left her with a void, which this new baby may just satisfy, that is, if she is ever given the chance to get her act together.

I found the story easy to get into and even though the characters were a bit of an mystery to me, having not read the other books in the series, I was soon able to pick up the thread. It's hard hitting and doesn't pull any punches but then that's the trademark of this talented author who writes about what she knows with such honest realism. It's hard to believe that 1981 now seems so far away that it almost feels historical, but not quaintly historical, as this was a time of great social and political change. Families were struggling to keep body and soul together and many council estates such as the one in Bad Blood were a scheming hotchpotch of thwarted dreams and the gradual erosion of family life.

The author does a great job of bringing time and place alive, to a time before mobile phones and social media, taking us to the very depths of despair and to the absolute misery of hopelessness.

I am sure fans of this author's writing will delighted by this continuation and by the end of the book will be eagerly looking forward to the next installment.

Best Read With...A large vodka and coke and a packet of crisps..


Julie Shaw is the daughter of the only surviving member of the 13 Hudson siblings, born to Annie and Reggie Hudson on the infamous Canterbury Estate in Bradford. Bad Blood is her fifth book. 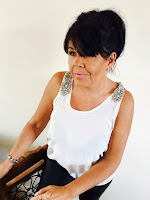 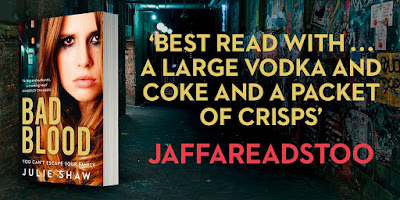