THERE ARE SOME FRIENDS YOU’LL NEVER FORGET…

NO MATTER HOW HARD YOU TRY

Edie is the friend that Heather has always craved. But one night, it goes terrifyingly wrong. And what started as an innocent friendship ends in two lives being destroyed.

Sixteen years later, Edie is still rebuilding her life. But Heather isn’t ready to let her forget so easily. It’s no coincidence that she shows up when Edie needs her most.

Someone has to pay for what happened, but who will it be?

I knew this book was going to be a bit special when I received this cut up photograph of the lovely Jaffa along with a proof copy of the book, and I'm pleased to say that I wasn't disappointed. 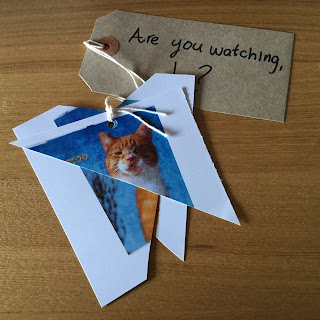 Watching Edie is all about obsession and the destructive power of friendship between people who should never really have been friends in the first place. On the surface it's a dark and dangerous account of just how, almost without trying, we can get sucked into a whirlpool of deceit, and then bubbling, just under the surface, is an emotional plot so clever it takes your reactions and screws them into a tight little ball.

The story evolves in two different time frames, which are cleverly named after and before and which lead you inexorably into a story, which is so deep it’s cavernous and so sublimely crafted that you won’t be able to escape or put the book down. You will carry it around with you in case the words escape before you’ve had a chance to read them. That’s because, there’s always more to find out, and the fact that the story is dripped piecemeal, morsel by tantalising morsel, by two narrators who are each supremely flawed , makes this an altogether compelling psychological thriller.

I’m deliberately not giving you anything of the story, or any details about the central characters, Edie and Heather, because you need to make their acquaintance without any introductions from me and I want you to get to the ending and go …wow…like I did.

So, if you’re looking for a compulsively readable, hauntingly addictive, cleverly contrived psychological thriller that will have you on the edge of your seat then ..here it is. Read on.

The strap line for the novel reads “Watching Edie: The most unsettling psychological thriller you'll read this year”…and I'm going to be one who argues with that.

Best Read with …Lamb tagine and a comforting glass of red wine...

Camilla Way was born in Greenwich and studied modern English and French literature at the University of Glamorgan. Formerly an editor on the men's magazine Arena. Camilla now writes fulltime and lives in south-east London with her partner and children.

I'm really excited to be able to give away a lovely hardback copy of Watching Edie in this UK only giveaway. 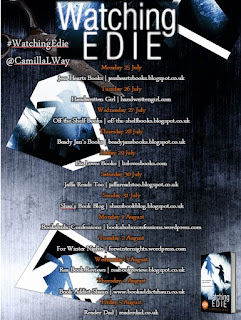