Jaffareadstoo is thrilled to be hosting today's stop on 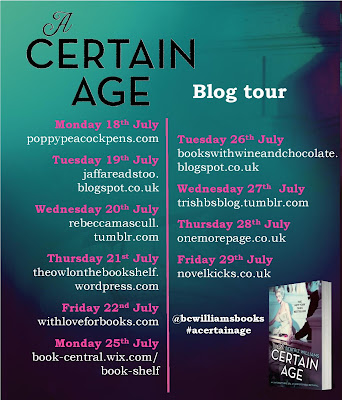 As the freedom of the Jazz Age transforms New York City, the iridescent Mrs Theresa Marshall of Fifth Avenue – a beautiful socialite of a certain age – has done the unthinkable: she’s fallen in love with her young lover, Captain Octavian Rofrano, a handsome aviator and hero of the Great War. But though times are changing, divorce for a woman of Theresa’s wealth and social standing is out of the question.

When Theresa’s bachelor brother, Ox, decides to tie the knot with the youngest daughter of a newly wealthy inventor, Theresa enlists her lover to present the family’s diamond rose ring to pretty ingénue, Miss Sophie Fortescue – and to check into the background of this little-known family. Yet even as he uncovers a shocking secret, Octavian falls under Sophie’s spell…

Divided loyalties and dangerous revelations lead to a shocking transgression and eventually Theresa must make a choice that will change them all forever.

And to celebrate our stop on the tour, here's a lovely interview with the author Beatriz Williams..

Where did you get the first flash of inspiration for A Certain Age?

For some time, I’ve wanted to set a book in the 1920s – I talk all the time on book tour about the many ways this decade transformed Western culture into what we are today – but I was waiting for just the right story to come along. And one day I was listening to the end of Der Rosenkavalier, an opera by Richard Strauss about a woman who loses her much-younger lover to a sweet young debutante, and I realized how well those themes might play out in a Jazz Age setting.

Well, like Der Rosenkavalier – which really contains one of the most poignant, bittersweet scenarios in all opera – the book opens in bed, where Theresa and her young lover Octavian are enjoying a tryst, when they’re interrupted by her brother Jay “Ox” Ochsner interrupts them with the news that he’s getting married to the lovely heiress of a wealthy inventor. Theresa, suspicious of this family’s mysterious pedigree, sends Octavian to investigate, and he not only uncovers a shocking murder mystery in Sophie’s background, he falls in love with her himself. While it’s packed with plot twists and romance and Jazz Age razzle-dazzle, it’s also about the fleeting nature of youth, and the rise of this modern new culture in Jazz Age New York, and the ways in which we all have to grow up and deal with our demons. Most of all, it’s a love story—two love stories, really—drawing together three bright, complicated, charismatic people.

Oh, absolutely! I think anyone who reads my books knows I’m obsessed with voice, and expressing each character’s particular personality through the music of dialogue. My characters are real, living people inside my head, and I can’t help loving them with all their faults, in the same way you love your own children. And just like children, they have their own minds and wills, so that you have to adjust the story as you get to know them better. I had such a tough time with Octavian, for example, because he’s the kind of person who keeps his deepest thoughts and his misery on the inside; I kept having to rewrite scenes because I knew he would never say or do something that I needed him to say or do! And Sophie ended up being so much richer and more resilient that I expected – the character in the opera is more like an early Disney princess, wringing her handkerchief and stamping her sweet little foot.

I think I identified most with Sophie, who tries so hard to be good despite the tides of ambition and emotion running inside her. But I felt so much empathy for Theresa, who has lost virtually every person she’s ever loved – starting with her husband, who showed himself a philanderer early in their marriage, to her baby daughter to her oldest son, who dies in the First World War. So she’s hiding so much pain and misery, which of course she’s not going to tell you about because she’s Theresa, and I loved the way she grew and stretched during the course of the story.

Your writing is very atmospheric – how do you ‘set the scene’ in your novels and how much research did you need to do in order to bring the place and people to life?

You know, I had a lot of early exposure to theatre as a child, so it’s a natural process for me to imagine myself in the middle of a scene and feel the characters walking and talking and thinking around me. And in my view, the history is the setting on which a human drama plays out, so the focus should be on that drama with the surrounding details presented as naturally as possible. You can’t be too heavy handed, or it doesn’t work – you’ve popped outside the character’s point of view and dragged your reader out of the narrative world while you discourse on all your historical knowledge. Lucky for me, of course, I’m writing about periods in which we have a photographic and often cinematic record, so I can absorb all the nuances of dress and posture and syntax, the mannerisms and the furniture and food. Novels written during the period are a big help, as are diaries and letters, because you must absolutely create an authentic period voice, however much you streamline that voice to make it accessible to a modern reader. When I have specific questions, such as brands of soap and the price of a subway ride, I turn to the internet, which has become a godsend to writers of historical fiction! I especially love looking up vintage menus to figure out what my characters would be eating and drinking, since I’m a bit of a foodie myself.

I’ve had so much fun writing about the 1920s, I’m going to stay there for a few more books! My next one is called THE WICKED CITY, and it’s about a straight-arrow Prohibition agent who recruits a flapper to help him crack a bootlegging ring.

A graduate of Stanford University with an MBA from Columbia, Beatriz Williams spent several years in New York and London hiding her early attempts at fiction, first on company laptops as a communications strategy consultant, and then as an at-home producer of small persons, before her career as a writer took off . She lives with her husband and four children near the Connecticut shore.

Huge thanks to Beatriz for answering my questions so thoughtfully and also to  Jaime at Harper Collins for my review copy of A Certain Age and for the invitation to be part of this exciting blog tour.