I am delighted to host a stop on the 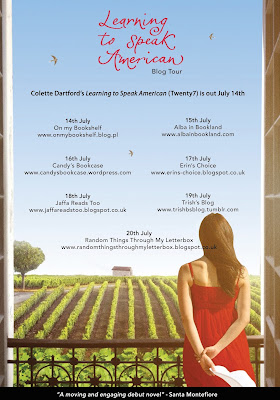 How I Found The Courage To Start Writing

I wrote my debut novel, Learning To Speak American, while I was living in California’s idyllic Napa Valley. Up until then writing had been a hobby, something I did for my own pleasure and rarely allowed anyone else to read. But creative writing is like most things – the more you practice, the better you get. Because my American visa prevented me from working, I had time to write, and gradually my confidence grew to the point where I began to enter competitions. Imagine my surprise and delight when I was shortlisted for a poetry prize,  runner-up in a short story competition and published in an anthology.

It’s amazing how a taste of success, however small, can really give your courage a boost. I wanted to improve the quality of my writing but since I had no formal training on which to build, (my career was in policy research), I found a mentor and worked closely with her until I moved back to the UK. This one-to-one relationship suited my style and personality, but I know other writers who prefer the support of a writing group, or the structure of an evening class at their local college.

Getting impartial, constructive feedback on your work is essential if you want to submit it to agents and publishers. They are inundated with aspiring authors and you need to be prepared for rejection. It can easily crush your confidence but remember than even bestselling authors like Stephen King and JK Rowling were rejected many times before they found success. And when, at last, you get that call from an agent, saying he loves your novel and would like to represent you, it’s absolutely worth all the ups and downs along the way. 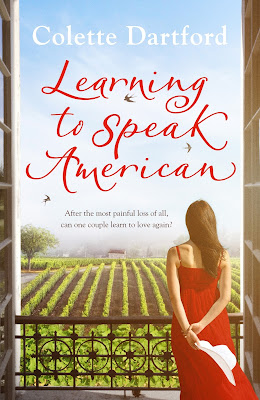 Having suffered in silence since the tragic death of their young daughter, Lola and Duncan Drummond's last chance to rediscover their love for one another lies in an anniversary holiday to the gorgeous Napa Valley.

Unable to talk about what happened, Duncan reaches out to his wife the only way he knows how - he buys her a derelict house, the restoration of which might just restore their relationship.

After all the heartbreak, can Lola and Duncan learn to love again

The loss of their beloved daughter, Clarissa, has devastated Lola and Duncan Drummond. In a desperate attempt to pull together the pieces of their marriage, a last ditch holiday to California's beautiful Napa Valley offers, just maybe, a semblance of hope. Amidst the glory of vineyards and lush, green countryside, Lola finds an element of peace and the idea of restoring a derelict cottage, aptly named The Treehouse, shakes her out of a lonely, grief-ridden apathy. What then follows shows Lola blossoming alongside The Treehouse, which in an unexpected way, helps to set her on the road to recovery, but at what cost to her relationship with Duncan?

The story opens up from the very start and I had enormous sympathy for both Duncan and Lola, although as the story progressed, I felt my allegiance, simply because of Duncan’s behaviour, focused more sympathetically on Lola.  There are some perceptive observations into the grieving process, with a real sense of two damaged souls trying desperately to make sense of their grief ,but who never really communicate properly with each other.

For some reason, I expected the novel to be a lighter read and was surprised at just how much depth the author’s reveals about loss and the different ways that people come to terms with hurt and despair. There’s a lovely, lyrical quality to the writing with a real sense of time and place, which helps to bring the beautiful Napa Valley to life, and although I have never visited California, I could, from the author’s descriptions visualise the beautiful countryside around The Treehouse quite clearly.

In many ways Learning to Speak American is a difficult novel to enjoy per se as it touches on a really heart breaking situation, and yet, as the novel progresses a lightness comes across the narrative and you can’t help but wish that everything is going to work out for Lola and Duncan.  And does it...well, you’ll need to read this lovely story for yourself to find out ..

Learning to Speak American is a very good debut novel from a talented new author in contemporary fiction.

Best Read With ...…freshly grilled steaks and a delicious bottle of Opus One from the Napa Valley..

Learning to Speak American is Colette Dartford's debut novel and is based on her experience of renovating a derelict house in California's Napa Valley. Having bought and renovated the house, Colette lived there with her husband for many years before moving back to the UK. Colette wrote the book in California where it was a quarter finalist in Amazon's first novel award. Before becoming a writer, Colette worked as a Political Research Consultant in public policy for many years and has a MPhil in Political Science, her second novel, The Sinners, will be published by Bonnier in 2017. 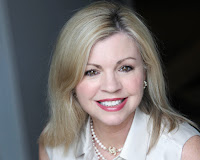 You can find more about Colette on her website

Big thanks to Alice at Midas for her invitation to be part of this blog tour.