My thoughts on Go Set A Watchman ~ Harper Lee

When you have a book that you really, really love, you always have at the back of your mind what it would be like if you could read it again, entirely anew and as fresh and bright and shiny as a new penny. I never thought that I would be given the opportunity to take another look at To Kill A Mockingbird, a book I first read and fell in love with, some thirty years ago, when it was already twenty years into its role as a classic of American literature.

So Go Set A Watchman was duly delivered, opened, perused and finally read...and here are my thoughts...

We meet Jean Louise Finch, in 1954, aged twenty six, as she returns home, from New York, back to the small town of Maycomb for her annual two week vacation. Her father, Atticus, now seventy two years old is crippled with arthritis, but still practicing law. Aunt Alexandra maintains the status quo in the Finch household, as Calpurnia, their black housekeeper is now retired and has not been replaced.

With obvious similarities and unique differences, the story emerges of a small town in turmoil. Racial tensions and hostilities are at breaking point and even as times are changing, there are those in Maycomb for whom time stands still. Racial differences which were glossed over in To Kill A Mockingbird suddenly become dangerously real, and for Jean Louise it becomes a time of great revelation, as she and those around her start to re-evaluate their own moral compasses.

Parts of the story are sophisticated beyond measure, with wonderful wry, observations which do credit to Harper Lee's undoubted skill as a writer. There are some beautifully observed small touches and some real treasures, like this about Atticus:

"On some days he wore two watches: he wore two this day, an ancient watch and chain his children had cut their teeth on, and a wristwatch. The former was habit, the latter was used to tell time when he could not move his fingers enough to dig in his watch pocket. He had been a big man before age and arthritis reduced him to medium size.”

There is, of course, much debate about the portrayal of Atticus in this version, which shows him as both flawed and imperfect. I think it’s probably important to put this change of his character into context within the era in which this version was written. It was a time of significant racial unease and of gross moral turpitude, and rather than totally destroy Atticus's image as the great defender, it shows that he was a product of the time in which he lived. However, Jean Louise feels the loss of her father’s conscience keenly, as would any child when their beloved parent is held up to scrutiny and found to be culpable.

"Every man's island, Jean Louise, every man’s watchman, is his conscience'

Knowing the book's content, and of course, I'm not going to reveal more, as that would spoil it, but I can see why this version of the story was rejected by the early publishers. To print this, even in 1960, would have been akin to lighting the blue touch paper and running for the hills. I can see that a more sympathetic version, in To Kill A Mockingbird, as seen through the eyes of the child Scout, would be far more acceptable at that time, to a wider audience.

Of course, the book’s not perfect, that’s why it was rejected and there are parts of the narrative which are clumsy, and which undoubtedly came out much better in To Kill A Mockingbird, but there are also some wonderful literary gems, which I’ll let you discover for yourself.

So, my initial reaction to Go Set A Watchman is that it deserves to be read alongside To Kill A Mockingbird, not to replace it or spoil it, but to augment it. It's time to allow a few ghosts to be laid to rest , and to take Go Set A Watchman as the literary gift it undoubtedly is, and to allow Harper Lee's unique voice and wry observation to take flight once again.

Isiah 21 : “ for thus hath the Lord said unto me,
Go, set a watchman, let him declare what he seeth” 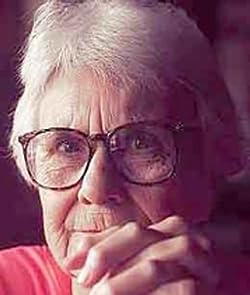 Harper Lee was born in 1926 in Monroeville, Alabama. She attended Huntingdon College and studied law at the University of Alabama. She is the author of To Kill a Mockingbird and has been awarded numerous literary awards including the Pulitzer Prize and the Presidential Medal of Freedom.