📖 Blog Tour ~ Through the Water, Darkly by Victoria L Short

What if their future lay in her past?
Caroline Curtis is an avid horticulturalist, who is injured during the restoration of a local country estate.
She wakes in a familiar body, but a different time, and with mixed memories of her twenty-first century life and those of a seventeenth century lady, which causes difficult conflicts not only in herself but the people around her.
The first English civil war is over, and the king deposed.
The Prince of Wales is fleeing the country, and, as Caroline fights to change the future of the man with whom she has fallen in love, she begins to realise that time is not a straight line.
📖 My Review...
Caroline Curtis has the extraordinary experience of falling through time only to discover that she is entangled in a very different England. Waking up in the seventeenth century with only hazy memories of her life in the twenty-first century, Caroline has to adjust very quickly especially as she takes on the persona of a young noblewoman called Carolina Sackville.  When she meets the handsome, Nicholas Trevilian, Caroline not only gets caught up in the political intrigue surrounding his involvement in the English Civil War but she also starts to feel a deep emotional connection to Nicholas which transcends time.
What then follows is a historical time slip novel which whisks us back to a time of great danger especially as King Charles I is facing uneasy opposition and to be on the wrong side of the political divide during the Civil War is tantamount to treason. The author brings to life the historical aspects in a lively way and the romance between the two main characters is handled with care.
Reminiscent, in places, of the Outlander novels, albeit in a different time-frame Through the Water, Darkly looks at the concept of time travel in an adventurous way with, at its centre, a dramatic love story between two characters who are lost in time and find themselves in extraordinary circumstances.
🍷Best Read with...a glass of chilled wine.
Follow the Blog Tour
Twitter @Vlshort #ThroughTheWaterDarkly
Instagram @toriajames
@RandomTTours 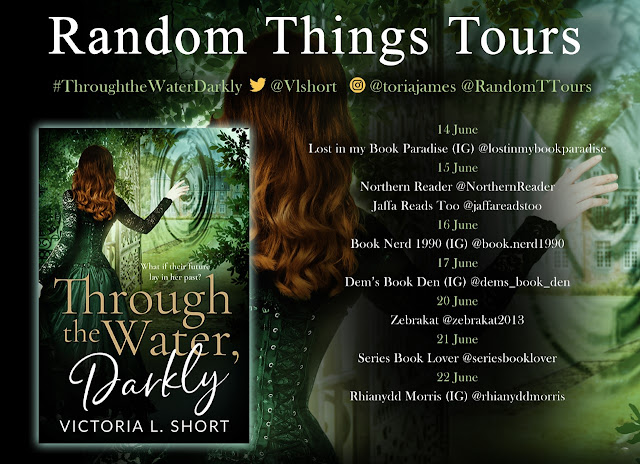