Beleaguered businessman Kevin Tyler's life is imploding: he's spent months setting up a deal to open an office in Northern Germany, risking everything he owns to push the project through – but at the last possible moment, his partners renege on the agreement when another party sweeps in with a better offer.
Left high and dry, Tyler knows he is going home to bankruptcy and an uncertain future. And to add insult to injury, an overbooked flight sees him bumped off the last plane home, leaving him behind to wait out a storm until the next departure the following morning.
Stranded in the airside zone of a remote municipal airport, Kevin's luck seems to have run out – until he stumbles upon a bag of money that could be the solution to all his woes.
There's just one problem – the money is part of a conspiracy of blackmail and murder, and those involved are willing to do anything to keep it.
📖 My Review ..
With a business deal gone disastrously wrong, Kevin Tyler's life is about to implode in the most dramatic way possible but at the start of the novel he is merely a weary business man on his way home. However, when his plane is unexpectedly delayed Kevin is forced to spend the night air side at Barsbecker airport, with very interesting consequences.
Taking a rest break, Kevin inadvertently discovers a bag crammed with more money than he could ever have imagined. This seems like a gift from the gods to Kevin but  along with the temptation to keep the money for himself comes the possibility of real danger. What then follows is an exciting cat and mouse thriller, with ruthless characters who will stop at absolutely nothing to keep their money.
Airside is an exciting thriller which flows well albeit a little slowly at first but once the action gets underway the plot moves quickly, bringing suspense and intrigue into the story with characters who are as violent as they are dislikeable however, all credit to the author for making their inclusion into the story feel so scarily authentic. I liked the inclusion of the more personal side of Kevin's life and in particular his relationship with his daughter, Maddie,.
Looking at the way the story evolves, I can well understand the author's skill in scriptwriting. Imaginative, and creatively written, Airside is an exciting standalone thriller from an author who is well known for his Marc Dane series of action thrillers.
🍵Best read with..  A strong latte, extra shot.
About the Author
James Swallow is a New York Times, Sunday Times and Amazon #1 bestselling author and scriptwriter, a BAFTA nominee, a former journalist and the award-winning writer of over sixty books, along with scripts for video games, comics, radio and television. His writing includes the Marc Dane action thrillers, the Sundowners steampunk Westerns and fiction from the worlds of Star Trek, Marvel, Tom Clancy, Warhammer 40000, Doctor Who, 24, Deus Ex, Stargate, 2000AD and many more.
AIRSIDE, his new stand-alone thriller, is out now from Welbeck.
Twitter @jmswallow #AirsideBook
@welbeckpublish 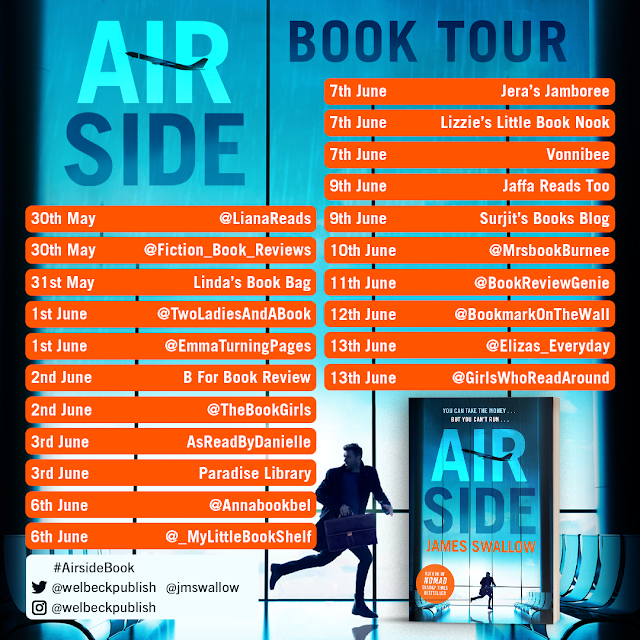