Heather Harris is a piano teacher and professional musician, whose quiet life revolves around music, whose memories centre on a single song that haunts her. A song she longs to perform again. A song she wrote as a child, to drown out the violence in their home. A song she played with her little sister, Harriet. But Harriet is gone ... she disappeared when their parents died, and Heather never saw her again. When Heather is offered an opportunity to play piano on a cruise ship, she leaps at the chance. She’ll read her recently released childhood care records by day – searching for clues to her sister’s disappearance – and play piano by night ... coming to terms with the truth about a past she’s done everything to forget. 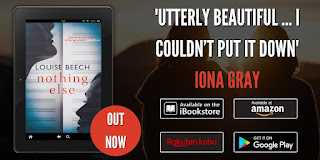 📖 My Review...
There a few authors whose work I will read without even looking at the blurb and who I have in my literary armoury of 'books I know I will love'. Louise Beech is one of those authors who takes you by the hand and doesn't let go until the story is told.
Heather Harris takes a job on board the cruise ship Queen of the Seas where she is booked as the resident pianist for the duration of the voyage. Immersing herself in music has always been of great comfort to Heather especially as her childhood was filled with trauma so deep it has left a lasting scar. Now in her late forties, and at something of a crossroads in her life, Heather needs to face the demons of her troubled past, but as painful memories of Harriet, the little sister she once shared piano lessons with starts to emerge so Heather must begin to peel back the layers of hurt which she has carried within her for so long.
The power of music in all its different genres is very evident and there is a definite soundtrack running throughout the narrative, which is helped enormously by listening to the Spotify soundtrack mentioned at the start of the novel but even without this it is very easy to become immersed in the way Heather uses her connection to music in order to tell us a powerful story. Childhood trauma is never an easy subject and all credit to this talented writer for giving us Heather and Harriet's story in such a sensitive but very powerful way.
Nothing Else is one of those wonderful stories which just absolutely fits the moment. Beautifully written, and sensitively described, I was carried along on every step of Heather's journey, from the quiet times on board the Queen of the Seas when she is lost in her music, to the utter joy when life finally gives her, and the one person she loves most in the world, something to celebrate.
🍷Best Read with...a glass of chilled wine and the Nothing Else playlist gently playing
I'm delighted to have Nothing Else as my Featured Book of the Month in July
About the Author 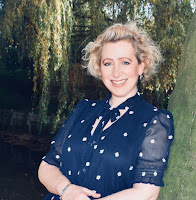 All six of Louise Beech’s books have been digital bestsellers. Her novels have been a Guardian Readers’ Choice, shortlisted for Not the Booker Prize, and shortlisted for the RNA Most Popular Romantic Novel Award. Her short fiction has won the Glass Woman Prize, the Eric Hoffer Award for Prose, and the Aesthetica Creative Works competition, as well as shortlisting for the Bridport Prize twice. Louise lives with her husband on the outskirts of Hull.
Twitter @louisewriter #NothingElse
@OrendaBooks #BlogTour #JubiliantJune
@RandomTTours 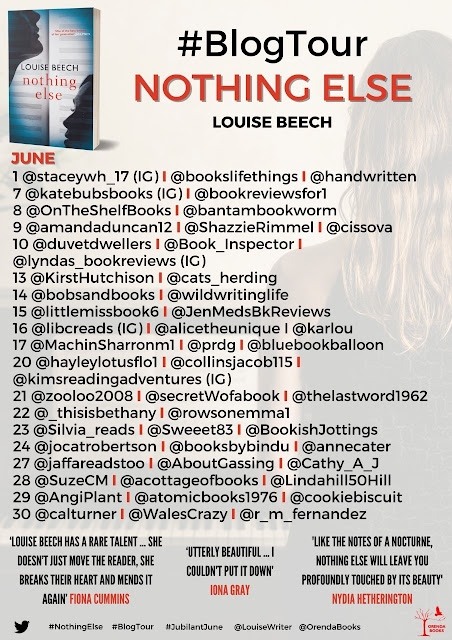