Cameron and Lisa Murdoch are successful New Zealand crime writers, happily married and topping bestseller lists worldwide. They have been on the promotional circuit for years, joking that no one knows how to get away with crime like they do. After all, they write about it for a living. So when their challenging seven-year-old son Zach disappears, the police and the public naturally wonder if they have finally decided to prove what they have been saying all this time… Are they trying to show how they can commit the perfect crime? Multi-award winning bestseller Paul Cleave returns with an electrifying and chilling thriller about family, public outrage and what a person might be capable of under pressure, that will keep you guessing until the final page... 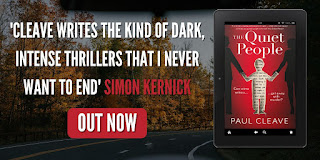 📖 My thoughts..
They do say, apparently, that if anyone can plot a perfect crime it's a crime writer, and for husband and wife writing duo, this nightmare is about to come true when their seven year old son, Zach, disappears from their family home. With the finger of blame very firmly pointing in the direction of Cameron and Lisa Murdoch what evolves is an exceptionally clever crime thriller which has the added bonus of allowing the reader a particular insight into the story with a prologue which, quite literary, had me jumping out of my skin.
The Quiet People is one of those quickly immersive stories which you say to yourself I'll just read one more chapter and before you know it you are flashing through the story at the speed of light reeling in disbelief as the story throws up so many twists and turns that you need your wits about you to keep up with what's unfolding on the page in front of you. I do love a story where you never quite know who is telling the truth, first, I was on the side of Cameron and Lisa whose ordered life is thrown into absolute chaos, only to then feel quite sorry for the police investigation team, who,  it must be said, don't exactly do themselves any favours by their incompetent handling of this sensitive case.
Very cleverly put together, thrillingly sophisticated, and with a definite twist in the tale, which I didn't see coming, The Quiet People, is a roller coaster of a crime thriller. It grabs your imagination from the start and doesn't let go of your emotions until this absolutely chilling story is finished.

Paul is an award-winning author who divides his time between his home city of Christchurch, New Zealand, where most of his novels are set, and Europe. He has won the New Zealand Ngaio Marsh Award three times, the Saint-Maur book festival’s crime novel of the year award in France, and has been shortlisted for the Edgar and the Barry in the US and the Ned Kelly in Australia. His books have been translated into over twenty languages. He’s thrown his frisbee in over forty countries, plays tennis badly, golf even worse, and has two cats – which is often two too many.
Twitter@paulcleave #TheQuietPeople #PerfectCrimeClub #YeahNoir
@OrendaBooks
@RandomTTours 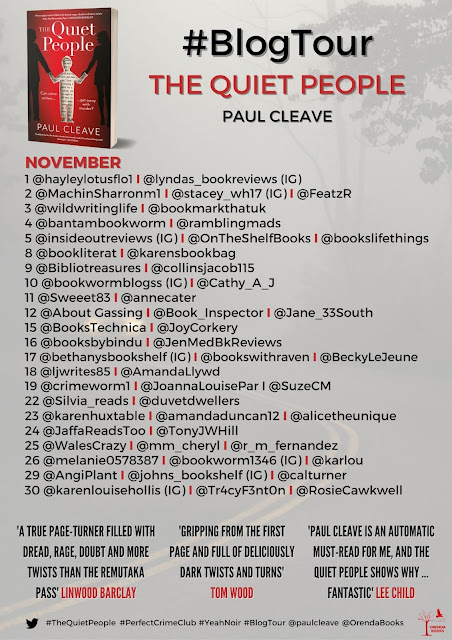