It's New Year's Eve and Josh has a high-flying proposal planned. An exclusive pod on the London Eye, with champagne, truffles and the ring. It's perfect.
Until she says no. And they have to spend the next 29 excruciating minutes alone together.
By the time Josh is back on the ground, his whole life is up in the air. He's managed to lose his girlfriend, his job and his flat.
Realising he can't trust his own judgement, Josh puts his faith in fate. From now on he will make every choice by flipping a coin. It's reckless and scary, but Josh has tried the right way and look where he ended up.
And what if the girl of his dreams is just one flip of a coin away?
🎄What did I think about it..
Josh had everything planned for an amazing New Year’s Eve marriage proposal to his girlfriend. Sadly, this doesn't play out the way Josh wants, which then leads him into a year of indecision which made all the more thought provoking when he decides that from now every decision he makes will be based on the flip of a fifty pence coin.
Flipping a coin gets Josh into a whole heap of trouble but it also makes him aware of who his true friends are as, over the space of an eventful year, we get to know every aspect of Josh’s life and realise the significance of what happens when you decide to allow fate to intervene in the pattern of your life.
The Flip Side is a real joy to read, beautifully written with a skilful eye for all those little subtle nuances which make the story so realistic and such fun to read. It’s witty and entertaining and yet at the same time it’s heartbreakingly poignant. There’s a real sense of ease within the story, nothing ever feels rushed or forced and the dialogue is genuinely funny that I found myself laughing out loud especially when Josh and his mates get together, it’s almost like you’ve known them for a lifetime. I raced through the story in one sitting as I really couldn’t put the book down until I found out whether Josh would face another New Years Eve alone or whether by flipping the all important coin he would find his heart’s desire.
The weather has been so gloomy over the past few days that I definitely needed something to cheer me up in these last few days of lockdown 2.0. Reading The Flip Side came to my rescue as it’s the absolute perfect read to brighten up even the gloomiest of days. I have no hesitation in making this lovely feel-good story my featured book of the month for December.
About the Author 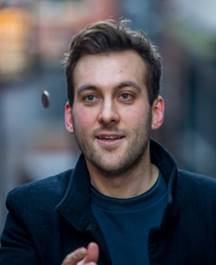 Born in Bristol, James Bailey began to dream of a writing career following a top mark in a Year 8 English exam, and he soon pursued journalism, starting a student newspaper and a sports website, interviewing athletes including Usain Bolt and Rafa Nadal. This burgeoning career was halted however, when he was diagnosed with Wolff-Parkinson-White syndrome, a cardiac arrhythmia. Following two operations, James supported the charity Cardiac Risk in the Young, carrying the Olympic Torch, running the London Marathon, speaking in the House of Commons, and appearing in BBC1’s Lifeline appeal, alongside pop star Pixie Lott.
Upon moving to London for university, during which time he avoided high rent by living in a Travelodge, James juggled studying Spanish with working as a red carpet reporter, interviewing stars such as George Clooney, Emma Stone and David Beckham.
Following his graduation, he travelled the world, journeying through twenty one countries looking for himself, and hopefully love. Having found neither, he returned home to Bristol, where he founded a walking tour company of the city and began working on his debut novel, having been selected for Curtis Brown Creative’s Six Month Novel Writing Course.
The Flip Side is his debut novel.
Twitter @JBaileyWrites #TheFlipSide
Instagram @JamesBaileyWrites
Website
@MichaelJbooks
@Midaspr 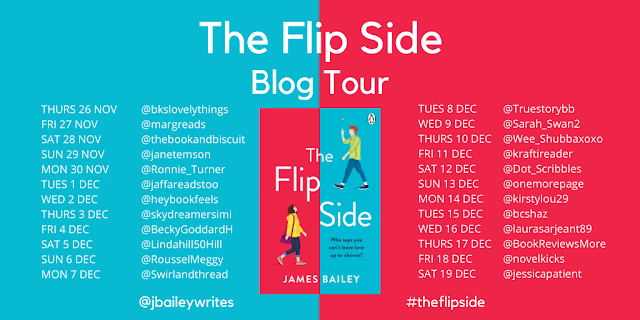