Blog Tour and Giveaway ~ Beyond the Moon by Catherine Taylor

Delighted to host one of today's Blog Tour Stop 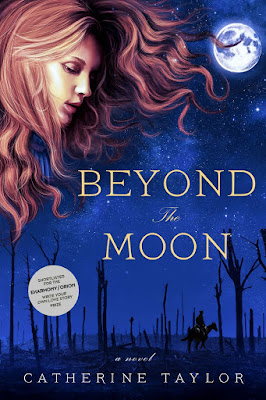 “Outlander meets Birdsong is this haunting debut timeslip novel, where a strange twist of fate connects a British soldier fighting in the First World War and a young woman living in modern day England a century later. Shortlisted for theEharmony/Orion Write Your Own Love Story Prize 2019”

In 1916 1st Lieutenant Robert Lovett is a patient at Coldbrook Hall military hospital in Sussex, England. A gifted artist, he’s been wounded fighting in the Great War. Shell shocked and sufferingf from hysterical blindness he can no longer see his own face, let alone paint, and life seem increasingly hopeless.

A century later in 2017, medical student Louisa Casson has just lost her beloved grandmother her only family. Heartbroken, she drowns her sorrows in alcohol on the South Downs cliffs only to fall accidentally partway down. Doctors fear she may have attempted suicide, and Louisa finds herself involuntarily admitted to Coldbrook Hall now a psychiatric hospital, an unfriendly and chaotic place.

Then one day, while secretly exploring the old Victorian hospital’s ruined, abandoned wing, Louisa hears a voice calling for help, and stumbles across a dark, old fashioned hospital room. Inside, lying on the floor, is a mysterious, sightless young man, who tells her he was hurt at the Battle of the Somme, a WW1 battle a century ago. And that his name is Lieutenant Robert Lovett...

Two people, two battles: one against the invading Germans on the battlefields of 1916 France, the other against a substandard,uncaring mental health facility in modern day England. Two journeys begun a century apart, but somehow destined to coincide and become one desperate struggle to be together.

Part WW1 historical fiction, part timeslip love story and at the same time a meditation on the themes of war, mental illness, identity and art. Beyond The Moon sweeps the reader on an unforgettable journey through time

There's a tendency for time-slip novels to either work, or not, some, in my opinion, never get it right and I abandon them pretty quickly, so it was with a little trepidation that I started a novel which purports to be Outlander meet Birdsong as that's a huge mountain to climb.

I was quickly drawn into Beyond the Moon with the opening chapter which begins in 1916 at Coldbrook Military Hospital where we meet with Robert Lovett who is recuperating from the his time in Northern France having experienced some of the worst atrocities of WW1. I could quite comfortably have read more about this brave young man only to be quickly plunged, in Chapter two, into the 21st Century world of Louisa Casson who wakes up to find herself unexpectedly in hospital after a traumatic event at Beachy Head.

What then follows is a cleverly controlled time-slip novel which looks at the effect of grief and loss on the human spirit whilst at the same time incorporating into the story an unusual and quite compelling love story. Moving forwards and backward in time we start to understand just how damaged Robert and Louisa really are, and by opening up their individual stories we gradually get a good idea of what makes them act in the way that they do.

The author writes well and controls the dual time narrative with ease, There's also a scarily realistic edge to the story, particularly in the descriptions of Robert's experiences during WW1, and also of Louisa's care in a 21st Century psychiatric facility, both of which are quite difficult  but equally compelling to read.

From the very beginning of the novel the story exceeded my expectations and I have thoroughly enjoyed travelling Beyond the Moon alongside Robert and Louisa.

Catherine Taylor was born and grew up on the island of Guernsey in the British Channel Islands. She is a former journalist, most recently for Dow Jones News and The Wall Street Journal in London. Beyond The Moon is her first novel. She lives in Ealing, London with her husband and two children.

Any personal data given as part of the competition entry is used for this purpose only and will not be shared with third parties, with the exception of the winners’ information. This will passed to the giveaway organiser and used only for fulfilment of the prize, after which time Rachel’s Random Resources will delete the data. I am not responsible for despatch or delivery of the prize. 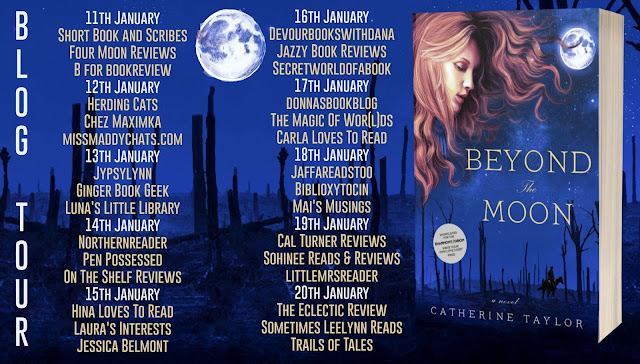