Blog Tour ~ Nothing Else Remains by Robert Scragg

Delighted to host today's stop on this exciting Blog Tour

When his old friend Max Brennan turns to him for help, DI Jake Porter gladly throws himself into the case as a distraction from his own troubles, aided by his partner, DS Nick Styles. Brennan’s father and then his girlfriend have gone missing in quick succession and it isn’t long before Brennan himself becomes a victim when he’s attacked in his own home. With events spiralling, and a faceless presence prowling in the background, can Porter and Styles catch a killer before another victim is claimed?

DI Jake Porter of the Homicide and Serious Crime Department makes a welcome return in another exciting story which picks up some six months after the first book in the Porter and Styles series finished. Still reeling from the attack on members of his investigative team, Jake is beginning to feel the pressure of the job and then, he gets word that the girlfriend of his mate, Max Brennan, has gone missing, and Jake is once again pulled into a complicated game of trying to track down a deadly perpetrator before it’s too late for Max and his girlfriend.

What then follows is a complex and convoluted police procedural which follows a criminal mastermind behind a series of unexplained disappearances, which on the surface don’t appear to be linked but with some sharp investigation, Porter and Styles, soon start to put the pieces of the puzzle together. The partnership between these two charismatic detectives is particularly well done as they each bring something quite unique to the relationship, and yet in this continuation they both have something that they’re hiding from each other.

I remember being impressed with this author’s previous novel in which Porter and Styles made their debut and I’m pleased to report that the duo have gone from strength to strength in this second outing where we get to know more about them as individuals. Porter in particular is quite complex, taciturn and hard working but hiding a hurt so deep it threatens to engulf him. Nick Styles, on the other hand, is the perfect partner, able to keep Porter on the straight and narrow whilst at the same time keeping his own personal life in order.

There is no doubt that this crime series has great potential to run and run and Nothing Else Remains definitely continues the series in great style with a compelling plot which grabs the attention from the beginning, and so exciting is the plot that I started to read the book on a rainy afternoon and didn’t look up for several hours until I had finished the story in one sitting.

Robert Scragg had a random mix of jobs before taking the dive into crime writing; he’s been a bookseller, pizza deliverer, Karate instructor and Football coach. He lives in Tyne & Wear, is a founding member of the North East Noir crime writers group. 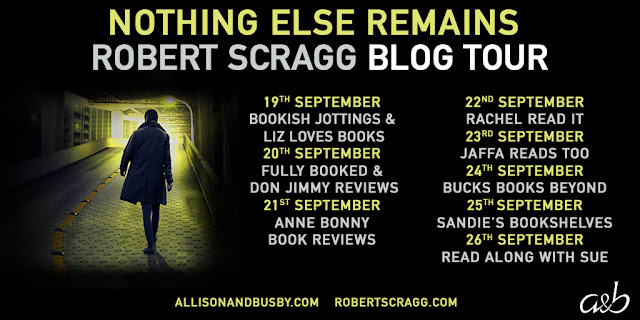