Book Review ~ Balance of the 12 by Ania

A war between the 12 is coming.

A war that could destroy the universe.

The universe was created by 12 energies which turned into the 12 races on earth. Eleven of these races live in secret among mankind, coexisting in precarious harmony and dependent on the Balance between them to keep the universe alive. If one race falls, the universe falls.

With war at the door, a domino effect of events is about to begin that could bring about universal annihilation. Only Jane, a Reader, and Samuel, a human, have the power to save the threatened races and protect the Balance. Unsure of each other and what lies ahead, they have one chance to learn about the true nature of the 12 races. One chance to witness the last Great War of the 12 races. But what they uncover reveals more than they ever believed possible.

Brought together by the Balance, Jane and Samuel must choose to follow the legacy left to them, or to watch as the 12 races erupt in a war that will destroy them all.

I'm not a huge reader of fantasy novels but something about this book, with its distinctive cover, appealed to me, and the idea that the races of the Earth had been formed by using 12 energies, was an intriguing one. The races live in secret amongst mankind delicately keeping the balance between them intact because if one of the races fails in this endeavor then the universe is lost. Only Jane, a reader, and Samuel, a human, have the power to save the threatened races and protect the Balance.

The author is obviously passionate about her story and writes with enthusiasm, using skeins of intense imagination to bring this world into fruition. There's an interesting balance between the characters and the interaction between them works, sometimes better in some places than others, however, I admit that could just be because fantasy and imagined worlds are not really in my comfort zone, and  so I may well be missing something.

The book was splendidly marketed within a package which contains a book mark, a candle and an embroidered book bag, all so beautifully produced and aimed at generating a certain ambiance before I had even started to read.  Everything is beautifully produced, and the story imaginative and well considered, however, there is  just a small point which I should mention and that is that the font is in a very neat script which is rather difficult to read comfortably.

Overall, Balance of the 12 is a unique fantasy novel written by an author who shows great potential in her chosen genre.

ANIA BO is a translator, researcher and author living in Turkey. Her passion is for Philosophy, in which she holds a masters degree and is about to complete her Phd. Watching her twin girls grow up has taught her more about human nature than all of her research combined. 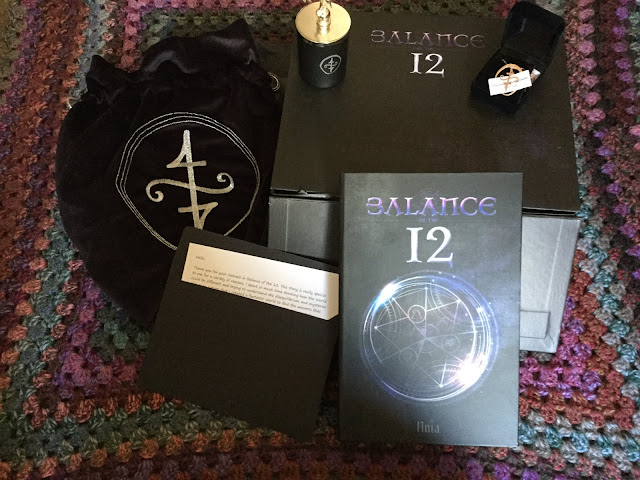