Mid 1970s. Ex-Praetorian Aurelia Mitela is serving as Roma Nova’s interim ambassador in London. Asked by a British colleague to find his missing son, Aurelia thinks it will only be a case of a young man temporarily rebelling. He’s bound to turn up only a little worse for wear.

But a spate of high-level killings pulls Aurelia away into a dangerous pan-European investigation. Badly beaten in Rome as a warning, she discovers the killers have kidnapped her life companion, Miklós, and sent an ultimatum: "Back off or he’ll die."

But Aurelia is a Roma Novan and they never give up…

Nexus means a connection which links one or more things and that is just what happens in this clever novella which fits expertly between AURELIA and INSURRECTIO in the Aurelia Mitela Roma Nova adventures, and those readers who have read these alternate history novels will certainly recognise some of the characters who bring this story to life.

We catch up with Ex-Praetorian, Aurelia Mitela in the 1970s when she is serving as Roma Nova’s interim ambassador in London. Living with her eleven year old daughter, Marina, and continuing her close relationship with Miklós, Aurelia's life should be on an even keel but then she has a conversation with Harry Carter, a senior intelligencer, who is deeply concerned about his son, Tom, who has been missing for three days. Once she learns more about Tom's disappearance, Aurelia is determined to do all she can to discover his whereabouts, but, in doing so, puts her family at risk, and herself in grave danger.

I rather like this idea of connecting existing novels with a well placed novella and the author does this really well, bringing such attention to detail that you don’t feel cheated by reading a shorter story which doesn’t meet expectations. NEXUS is packed with everything we have come to expect, strong and determined women, a central plot which is both dramatic and exciting and a whole host of bad guys who come straight out of central casting.

With her usual panache the author has given us another exciting Roma Nova adventure which is filled with all the trademark details we know and love about ROMA NOVA. Whilst, of course, it is completely possible to read NEXUS as a standalone story, I read this one comfortably over the space of an afternoon, however, my best advise would be to start at the very beginning and enter the Roma Nova of this talented writer’s imagination. 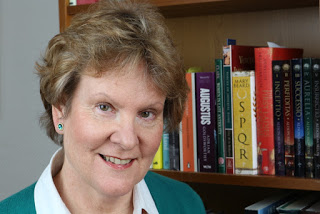 Audiobooks available for the first four of the series: click here