Review ~ Wonderland : An Anthology inspired by Alice's Adventures in Wonderland

From the greatest names in fantasy and horror comes an anthology of stories inspired by Alice's Adventures in Wonderland.

Join Alice as she is thrown into the whirlwind of Wonderland, in an anthology that bends the traditional notions of Lewis Carroll's classic novel. Contributors include the bestselling M.R. Carey, Genevieve Cogman, Catriona Ward, Rio Youers and L.L. McKinney.

Within these pages you'll find myriad approaches to Alice, from horror to historical. There's even a Wild West tale from Angela Slatter, poetry, and a story by Laura Mauro which presents us with a Japanese folklore-inspired Wonderland.

Alison Littlewood, Cavan Scott and Catriona Ward make the more outlandish elements their own, while James Lovegrove instead draws on the supernatural. Cat Rambo takes us to a part of Wonderland we haven't seen before and Lilith Saintcrow gives the legend a science-fiction spin. The nightmarish reaches of the imagination are the breeding ground for M.R. Carey's visions, while Robert Shearman, George Mann, Rio Youers and Mark Chadbourn's tales have a deep-seated emotional core which will shock, surprise and tug on the heart-strings.

So, it's time now to go down the rabbit hole, or through the looking-glass or... But no, wait. By picking up this book and starting to read it you're already there, can't you see?


I remember listening to the story of Alice in Wonderland when I was a little girl but I only really understood the dark and brooding nature of the story when I read it as an adult. I think it was one of the first classics I downloaded onto my kindle, when e-copies were still an innovative idea. There's something strangely compelling about Alice's Adventure in Wonderland and no matter when you read the story it still has that strangely dystopian edge which is quite, quite, chilling.

In this anthology of stories, the idea of Wonderland is explored in detail. The stories, all written by authors at the top of their particular genre, allow a wider interpretation of the story in fantastical fiction which range from poetry, to prose, and back again. The nineteen interpretations all have Wonderland as their theme but the tales are all very different, some are inspired by history, others by poetry, as in the Jabberwocky, another by the wild, wild west and there's even a story inspired by Japanese folklore.

I've really enjoyed dipping into and out of this book, picking a story here and there and finding something which sparks my imagination in all of them. I have a couple of favourites, Six Impossible Things by Mark Chadburn, and Good Dog, Alice by Juliet Marillier, but, of course, all the others have something special to offer.

Wonderland is a clever anthology which doesn't seek to rewrite, what is after all, an absolute classic, but which rather gives us an absolute feast of clever stories which reinterpret Wonderland in all of its fantastical glory. 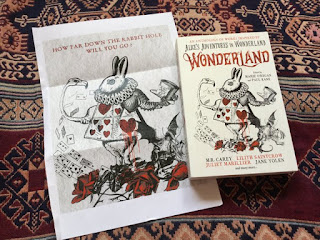