WW2. When the world falls to terror and tyranny reigns…

...how far would you go to resist?

Would you risk your own life or the lives of the ones you love?

From a young Jewish woman in love fighting her way out of the Warsaw ghetto, to a Czech assassin rising above his fears for an attempt on a Nazi Hangman’s life, to a daughter who vows to avenge her family by taking down a Japanese commander, and a French boy's touching act of defiance no matter how small.

Come and get a glimpse of the invisible side of WWII - the Resistance, those who refuse to bow down to brutality.

Hold your breath and hope for the best in the darkest of times, when our heroes and heroines risk all to defy evil so the light of freedom will shine over their countries again. 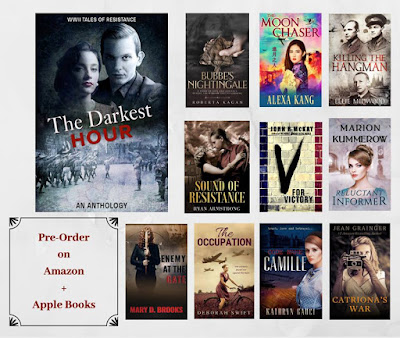 I was approached by John R. McKay the author of one of the novellas which can be found in this anthology.

V for Victory tells the story of thirteen year old Charles Mercier who has a fierce determination to see his beloved Paris free of Nazi oppression.

There's a tendency to suppose that all resistance fighters during WW2 were adults but this novella shows that young people, who we would consider still to be children, had just as much passionate zeal when it came to fighting for what they believed to be right. Thirteen year old Charles Mercier is moved to dramatic action when one of his schoolteachers draws a V for Victory sign on the blackboard and so with a fierce determination Charles sets out to do his bit for the war effort.

For a novella, V for Victory packs a powerful punch both in terms of creating the scene, which it does very well, I especially enjoyed the vivid description of the German army's triumphant march along the Champs Élysées, and also in terms of story content which is filled with a real sense of both history and adventure. It's quite poignant in places which goes to show just how scary it must have been to live during this dark time in world history and how brave Charles was as he tried to put right some of the wrongdoings.

V for Victory is just one of the ten stories on offer in this anthology and from reading the descriptions of each of the individual stories I am sure that they all do justice to the subject of the resistance during WW2.

The anthology will be published on the 22nd January 2019 and is donating all proceeds to the United States Holocaust Memorial Museum in Washington DC. The collection will be available in this  for just a few months. It is available to pre-order now from Amazon UK