Jaffareadstoo is delighted to be part of today's Social Media Blast

Village of the Lost Girls by Agustín Martínez

Village of Lost Girls is a breath-taking missing persons thriller set under the menacing peaks of the Pyrenees. Five years after the disappearance of eleven-year-old Ana and Lucia from the village of Monteperdido, Ana reappears unexpectedly inside a crashed car next to the body of an unknown man. The case immediately reopens and a race against time begins to discover the identity of the dead man and who was behind the girl’s kidnapping. And most importantly, where is Lucia and is she still alive?

Five years ago, best friends, Ana Montrell and Lucía Castán disappeared on their way home from school. For their families and the small village of Monteperdido high in the Spanish Pyrenees life would never be the same and despite a widespread search the eleven year old girls had, quite simply, vanished. And then, miraculously five years later, Ana is found unconscious but alive in the wreckage of a car and the investigation is re-opened. This time around the inquiry is led by a new team of investigators, Inspector Sara Campos and her boss Santiago Bain, from Madrid's head office must go back to the very beginning of the case to look at all of the evidence as they race against time to discover the whereabouts of the other missing girl.

Village of the Lost Girls is a multi layered and intense psychological thriller which looks at the mystery on various levels, from the complexity of the girls’ disappearance five years ago, to the almost impossible task of tracking down the perpetrator in a village which doesn’t give up its secrets easily. The brooding and unforgiving nature of the landscape adds its own mysterious and forbidding presence to the overall darkness of the story.

I really enjoyed this book, and even though it’s quite a hefty read coming at at nearly 500 pages, I fairly rattled through it, trying, and sometimes failing, to keep one step ahead of the investigation. There were several twists which I didn’t see coming and throughout the whole of the story there is a real sense of foreboding which gives the story its dark and creepy edginess.


Beautifully translated into English by the award-winning Frank Wynne, Village of the Lost Girls is an atmospheric and complex thriller which had me guessing from start to finish.

Agustín Martínez was born in 1975 and studied Audiovisual Communications in Madrid. Today, he is one of Spain's most renowned screenwriters who has worked on some of the country's most popular crime series. On a holiday trip with his family to the Pyrenees he overheard the locals talking about the case of a missing child. The idea for Village of the Lost Girls, his first novel, was born and has been translated into many languages since. 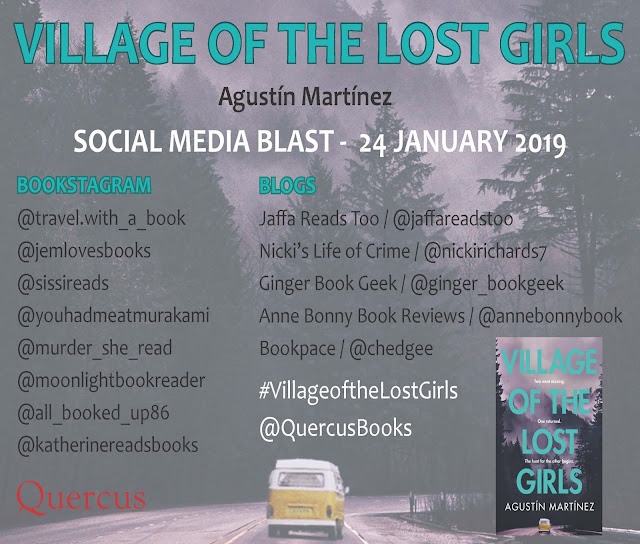