When nine children are snatched from a nursery school in South London, their distressed parents have no idea if they will ever see them again. The community in the surrounding area in shock. How could this happen right under their noses? No one in the quiet suburban street saw anything – or at least that's what they're saying.

But DCI Anna Tate knows that nothing is impossible, and she also knows that time is quickly running out. It’s unclear if the kidnappers are desperate for money or set on revenge, but the ransom is going up by £1million daily. And they know that one little boy in particular is fighting for his life.

It’s one of the most disturbing cases DCI Anna Tate has ever worked on – not only because nine children are being held hostage, but because she’s pretty sure that someone close to them is lying…

The day started out like any other at the Peabody Nursery School in Rotherhithe in South London but before the day is out nine children will have been abducted and the lives of the parents and nursery teachers will never be the same again. DCI Anna Tate is the SIO in charge of this fast moving police procedural drama and from the very start the action moves at a lively pace, secrets start to unfold, people's lives start to be uncovered and the way forward is often hampered by people who are quite simply not telling the truth.

I was hooked on this story from its opening prologue and I didn't look up except to make restorative cups of tea until I had finished the story in one sitting. It's compelling reading for all sorts of reasons, not just the very human drama which is unfolding, which is every parents worst nightmare, but also the mystery which is at the centre of DI Tate's personal life which is just as beguiling and which also starts to unravel as the story progresses.

In Safe Hands tugs away at your heartstrings, how could it not with nine three and four year olds abducted and in danger, but you also get a real sense of the parents' anguish and of the desperate police search for the perpetrators, which all feels authentic and quite believable.

The author writes well and certainly knows how to crank up the tension, keeping the momentum from start to finish. This is the first book in a proposed set of stories which feature DCI Anna Tate, the second book, At Your Door,  is due out in August 2019. Can't wait for that one 😉 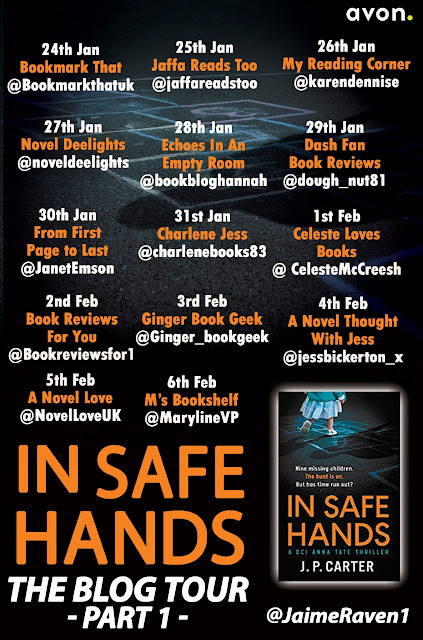