It's a real pleasure to welcome to Jaffareadstoo the author, Mark Wesley 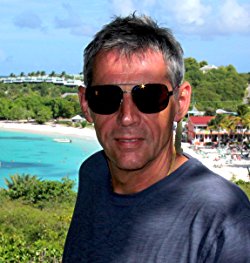 Hi Mark, tell us a little about yourself and how you got started as an author

Thanks for inviting me into your Jaffareadstoo blog, Jo. I was a reluctant author. I didn't think I had the staying power to complete something as tough to do as writing a novel. However, I had an idea for a story and the itch got itchier and I just had to get it out of my system. What a journey of discovery. Yes, the early drafts weren't filled with the stylish pro's I might have hoped for, but as I battled on, the writing improved. I was aware of my short-comings and was determined to deliver a book that competed with novels of a similar genre. I think most new authors must go through a similar learning curve.

It wasn't that I couldn't write. My career had been filled with endless scripts and 30" copy for commercials and short business films. But my skill was the ability to sumarise something in as few words as possible - exactly the opposite of writing a novel.

When I started writing I knew everything about the story and it's main characters from beginning to end. I can't imagine writing a story without knowing where it's going. It turns out I have a natural talent for story plotting and pacing. This might be because of a life-time of interest in film making and movies generally.

Where and when did you get the first flash of inspiration for your novel ,BANGK!?

In fact BANGK! is a combination of two elements. A while back there was a raid on the Millennium Dome. A diamond exhibition was held there and some daft gangsters thought it would be a good idea to nick them. They approached from the river. I was certain that a movie would be made of the story (I don't think it has). The opening sequence of BANGK! is how I imagined the opening scene to that movie - if ever it was made - should look like. Very much an 'Italian Job' caper. So, that was written and put to one side. Then I had this blinding inspiration about how to steal gold from the Bank of England. You can't get in to the bank - so, find a way to get some of the gold out. I devised a con that would force the BoE to put some of the gold into another place. Somewhere that would be a bit easier to break into.

All I needed was a main character and a couple of male side-kicks. Although the story starts with this group, it evolved into a my protagonist, James Stack, his side-kick Charlie 'Hollywood' Dawson and Summer Peterson. Each brought an interesting fresh element to the story.

Can you give us three interesting facts about BANGK! that won't give too much of the plot away?

Well, I have already mentioned an essential ingredient of the story earlier. I introduce a mysterious machiavellian character who only appears in telephone conversations. He calls himself 'Blackstone' and he moves amongst the great and the not so good in the world of banking and politics. He enters the story from time to time by leaving a 'Call this number' message for James Stack. He got his name from the nineteen century American illusionist, Harry Blackstone. Another thing. As you read, you'll notice that most of the chapter headings are song titles. That alone proved to be a really tricky thing to sustain. I was only looking for titles that in some way described the events in the chapter, rather than the actual words in the songs themselves. An index at the back provides info on who sang what.

James Stack is the main protagonist of BANGK!  - tell us about him and why you decided to tell his story?

Ah yes, James Stack, my all round good guy with an unreliable moral compass. I was determined that he shouldn't be compared with Lee Child's Jack Reacher. Reacher is a great action hero, but at six feet six inches, 250 pounds and gifted with undefeatable fighting skills, there's no danger he can't fight his way out of. I wanted James Stack to be tough but vulnerable. Yes, he is ex Special Forces, but there's a risk he might not survive a street brawl. He uses his wits to supplement his fighting skills. This is where the tension and drama lies when things get tough.

As for why. I didn't start with James Stack. I started with the story, but of course I needed a central character. I think I've found a good one. He's certainly part of my family now.

We may all have a different reasons for enjoy various fictional protagonists types. Some stories call for embittered violent types, others call for suave sophisticated hero's. In my case, I needed someone I could enjoy writing about and who the reader could support and cheer on, even if he does cross the line morally. I think he works because the villain of the book, Victor Avery, is someone you just love to hate. He's a smug, slimy and corrupt bastard. I chose the name Victor Avery because it has the jagged letters V and A, almost like teeth.

If BANGK! was optioned for a TV drama or movie , who would you choose to play James Stack and why?

From the very beginning I've been clear that the only person who could play James Stack would be, Colin Farrell. He carries that intelligent, tough but vulnerable quality I see in Stack. If anybody knows him. Get in touch. Quickly!

Can you tell us what's coming next?

The follow-up is already written. It's called FRACK! It's a big international adventure with one of the most original technical plots you'll ever read. Same cast: James Stack, Charlie Dawson and Summer. It's a hell of a ride.

The author, Mark Wesley, has been, at various times in his career, copy writer, jingle-maker, song writer and record producer but is best known as the legendary Radio Luxembourg D

Read my review of BANGK! by clicking here