Blog Tour ~ Do Not Become Alarmed by Maile Meloy

Do Not Become Alarmed Blog Tour

When Liv and Nora decide to take their husbands and children on a holiday cruise, everyone is thrilled. The ship's comforts and possibilities seem infinite. But when they all go ashore in beautiful Central America, a series of minor mishaps lead the families further from the ship's safety.

One minute the children are there, and the next they're gone.

What follows is a heart-racing story told from the perspectives of the adults and the children, as the distraught parents - now turning on one another and blaming themselves - try to recover their children and their shattered lives.

A Central American cruise should have been the holiday of a lifetime for Liv, Nora and their respective husbands and children, and at first everything is going well. The children flourish on board the ship and join in with all the many activities and the adults finally start to relax away from the pressures of life. That is until a fateful decision is made to go ashore and whilst the husbands go to play golf, Liv, Nora and the children are taken on a separate excursion which goes disastrously wrong. What then follows is a frightening portrayal of what can happen by being in the wrong place at the wrong time.

The story is told from the perspectives of the parents, alternating with that of the children, which works as it allows an insight into the two strands of the story, which is all so necessary to maintain momentum. The author captures the parent's utter fear as they realise that something has happened to their children which is beyond their control and their abject misery and gut wrenching sadness is palpable.  The children’s resolve is tested to the limit as they are taken into a situation which is terrifying, and yet, even though their ingenuity is commendable, there were times, particularly in the later chapters, when I had to suspend belief, as I didn’t quite feel that some of their situations rang true.

Whilst I enjoyed reading the story, I do feel that some parts of the novel worked better than others. There are some elements which could have been left out entirely, whilst other, more important issues could have been expanded upon to add a little more depth and clarity. However, there is no doubt that this is one of those frightening scenarios that you hope will never, ever, happen to anyone's children on what should be an idyllic holiday.

Do Not Become Alarmed is published on 6th July 2017

My thanks to the author and also to Josie at Penguin for my review copy of this book and also for the invitation to be part of this blog tour. 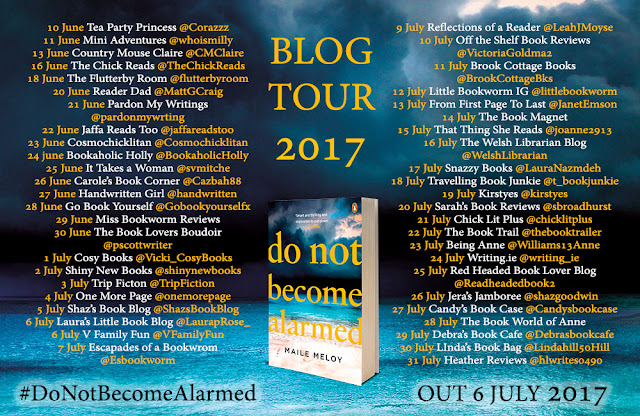