Blog Tour ~ I know My Name by C J Cooke

I Know My Name Blog Tour

Komméno Island, Greece: I don't know where I am, who I am. Help me. A woman is washed up on a remote Greek island with no recollection of who she is or how she got there.

Lochlan’s wife has vanished into thin air, leaving their toddler and twelve-week-old baby alone. Her money, car and passport are all in the house, with no signs of foul play. Every clue the police turn up means someone has told a lie…

Does a husband ever truly know his wife? Or a wife know her husband? Why is Eloïse missing? Why did she forget?

The truth is found in these pages…

I Know My Name is an addictive psychological mystery which draws you in from the opening chapter - a chapter which leaves you with more questions than it does answers. I'm being deliberately vague as this really a book which is easily spoiled by giving too much away.

All I will say is that the story fired my imagination from the beginning so that I never really knew what was going to happen next or indeed which character was telling a version of the truth. So many unanswered questions form the basis of the plot which is taut, tight and beautifully recounted.

The author definitely knows how to crank up the pressure and in I Know My Name the tension exists from the very beginning. I really had no idea where the story was taking me, which is why I read it quickly over the space of just a few hours, partly because I couldn't put it down, but also because I wanted to find out just what was going on. As with all psychological thrillers there is a sting in the tail, which I didn’t suspect until it was upon me and then everything fitted into place beautifully.

What that twist is, well, you’ll have to find out for yourself…

I Know My Name is one of those books which is just perfect for the holiday season, pack it in your travel bag and be prepared to suspend time ..

I KNOW MY NAME by acclaimed poet and academic CJ Cooke is being published in several other languages and a TV adaptation is in development. CJ was inspired to write the novel through her work in creative writing interventions for treating mental illness 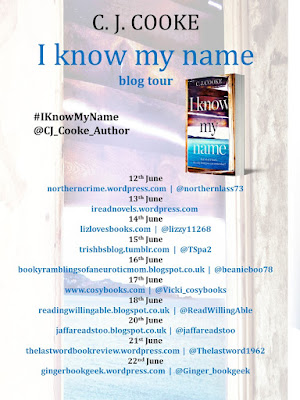