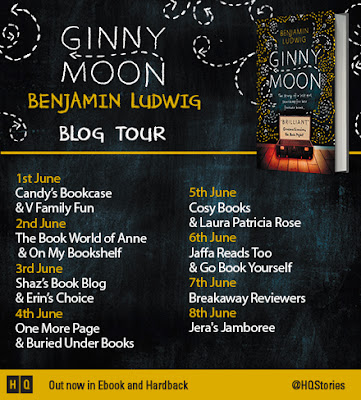 Everyone is looking at me. All of them. My Forever Mom next to my Forever Dad on the other side of the table with her hand on her big round belly. I don’t know what strikes and shakes are but no one asked a question so I keep my mouth shut very tight.

My Forever Dad takes out a piece of paper. “The computer said the doll was hit eighty-three times and shaken four,” he says. He puts the paper down. “Ginny, did you hit the baby?”

“The plastic electronic baby,” I say even though it’s a rule that We do not correct.

“It doesn’t matter whether the baby was real or not,” he says. “We asked you to try taking care of the baby. We can’t—”

“Brian,” says my Forever Mom. Then to me she says, “Ginny, it’s not okay to hit or shake a baby. Even if the baby isn’t real. Do you understand that?”

I like my Forever Mom a lot. She helps me with my home­work every night after supper and explains things when they don’t make sense. Plus we play Chinese Checkers when I get home from school. So I say, “When I was in the apartment with Glo—”

“We know what happened in the apartment,” she interrupts. “And we’re very, very sorry that she hurt you. But it’s not okay to hurt babies, ever. So we need you to start seeing Patrice again. She’s going to help you get ready to be a big sister.”

Patrice is a therapist. An attachment therapist. I haven’t seen her since the adoption in June. I lived with my Forever Parents at the Blue House a whole year before that. That was when I started going to my new school too.

Which reminds me again that Gloria is on her way right now. I don’t know how long it will take her to get here. I don’t know if she’ll get here before I go to see Patrice. And that’s impor­tant because I need to know when things are going to happen so I can count and check my watch and make sure everything works the way it’s supposed to.

I pick hard at my fingers.

“We’ll call her on the phone today and see when she’s available,” says my Forever Mom. “Probably early this next week, if she has some time in her schedule. I bet she’ll find an opening, for you.”

There's so much I want to say about Ginny Moon. How she's tough and strong, and yet as vulnerable as a kitten. That she's feisty and funny and will make you laugh out loud, but be warned she will also make you cry so many tears that your hanky will be all screwed up and soggy in your hand. She's special in so many ways but to tell you even a smidgen more would be to spoil Ginny's story forever.

So what I will say is that from the very start of the story, as Ginny settles in with yet another forever mum and dad, is that there are still elements of the lost child about her. A child made wise beyond her fragile years, and who once had more responsibilities heaped upon her vulnerable shoulders by an errant birth mother who should have known better.

I loved Ginny; I wanted to bring her home to live with me. I wanted to give her grapes and milk. I wanted to make her safe from all harm and more than anything I wanted life to be kind to her and for her to find a proper place with people who loved her just for being her quirky little self.

It's a very clever author who has the ability to instill such a sense of character whilst still maintaining the absolute integrity of the novel. I believed every word that Ginny uttered, her voice is strong, her personality cleverly controlled so that she never becomes a caricature of the quintessential 'troubled' child. Her forever parents are another matter altogether, but there again, I'll let you find out for yourself, about just how they all cope as their lives start to fall to pieces.

Ginny Moon will stay in my heart for a good long time. I hope that she can stay in your hearts too...

Best Read with...nine grapes and a glass of milk...

Benjamin Ludwig is a middle school language arts teacher, who has been teaching both children and adults since 1997. He believes strongly in supporting the voiceless and the displaced, especially their need for attachment. Shortly after he and his wife were married they became foster parents, and adopted their first placement: a teenager with autism and developmental disabilities.

Ginny Moon was inspired in part by conversations he had with other parents at Special Olympics basketball practices. He hopes to adopt again after his daughter transitions into adulthood. Benjamin lives in New Hampshire.

My thanks to the author and also to Samantha at Midas PR for the invitation to join this blog tour and their kind permission to feature the excerpt from Ginny Moon.

Blog Tour Runs until the 8th June, so do visit the other stops for more exciting content