shares this poignant account of what happened to his grandfather, Albert Sanger in 1917


A Hundred years ago, this month

At the outbreak of the First World War, my grandfather Albert Sanger and Harry Trowbridge, the brother of Albert’s sweetheart, Amy, joined the queue of volunteers at Newport, Isle of Wight, Drill Hall. Albert, aged 21, was a miller and Harry, aged 17, was a butcher’s errand boy. Both were enlisted to the Isle of Wight Rifles, an infantry regiment which was part of the Hampshire Regiment.
After training, on 30th July 1915, together with seven or eight thousand other men, they embarked on the liner Aquitania in Liverpool docks. The troop ship had two escorting destroyers to protect against German submarines. However, the weather was so bad that the escorts had to return to port on 31st. The ship took a long detour out into the Atlantic to avoid the U-boats. On 8th August, the “Rifles” were landed in the Dardanelles, Turkey.

Most of the men from the Isle of Wight were not to see England again for over two years. A large proportion, including Harry, were never to return. After a terrible mauling during the fighting at Suvla Bay, most of the Battalion were shipped to Alexandria in Egypt. Harry’s body was never identified, he is remembered on the memorial at Helios, not far from the site of the battle. Albert, wounded in the fighting, was repatriated to England. There he married Amy before being shipped to Alexandria to re-join his battalion in autumn 1916.

The Isle of Wight Rifles were encamped by the Pyramids of Giza and then moved on to a deployment at the Bitter lakes, by the Suez Canal. By then, the remaining raw recruits of 1914 were hardened soldiers, but nevertheless the territory through which they were fighting took its toll. The regimental diary tells of snakes, scorpions, sand storms and extreme heat.

In January 1917, they marched first to Mazar and then in February they began chasing the retreating Turkish army across the Sinai Desert. The 145 mile march across the desert to El Arish  took twelve days. On the 17th April, the offensive against the Turkish line at Gaza began. On the morning of 19th April, the “Rifles” led the attack against the Sihan Redoubt. The Redoubt was captured, but at the roll call at the end of the day, of the 800 men who went into action, only 2 officers and 90 men were recorded. Among those who did not respond to the roll call was Albert.

After the capture of Jerusalem, one of Albert’s mates returned to the scene of the battle of Sihan Redoubt. He found Albert’s army paybook and tatters of uniform still on the barbed wire of the Turkish line. The paybook, which soldiers usually kept in their left-hand breast pocket, had a bayonet hole through it and was soaked in blood. Meaning well, he sent a letter to my grandmother telling her of the circumstances of Albert’s death and enclosing the paybook. She kept it until her death in 1941. What Albert was never to know was that he had a daughter, my mother, who was born in March 1917.

Corporal Albert Sanger’s grave and many others of the men of 1st Battalion Isle of Wight Rifles, is in the war cemetery in Gaza. 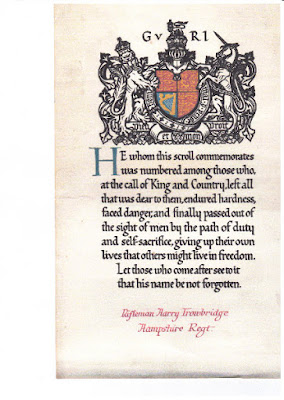 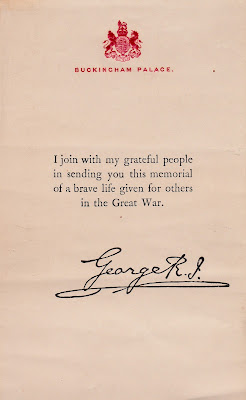 Huge thanks to Michael for sharing Albert and Harry's story. It is so important that the lives of brave men, like Albert and Harry, and of the sacrifices they made for King and country should never be forgotten.


Michael also has an interest in modern history and has a website relating to the evacuation of Dunkirk in World War II.