I am delighted to welcome the author, Jan Ruth back to Jaffareadstoo 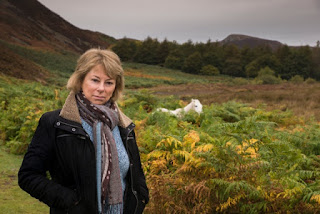 Today, Jan is sharing her thoughts about Natural Dialogue in her Midnight Sky series...

Just when you think you know everything about a subject, along comes someone to blow apart a lifetime of assumptions. Monty Roberts’ father was virtually destroyed by his son’s belief in ‘horse-whispering’, as a far more humane and less exhausting method of breaking and training horses. It’s no secret that Monty took a severe beating for it.

A remarkable man, Roberts went on to foster disadvantaged children, using much the same wisdom and insight he’d learnt through studying horses and their social groups in the wild. It’s too easy – and often misguided – to bestow animals with human emotion, but maybe trust is rooted in the same place in humans as in horses, and observation and interpretation is all that’s required to make a valuable connection, regardless of language. And isn’t whispering usually far more effective than shouting? Much the same as writing good fiction; and if we’re talking analogies there’s nothing worse than clunky dialogue. Is Natural Horsemanship simply natural dialogue?

As with most things that work well, it’s based on a simple concept of alignment with nature. Horses like to hang in a crowd (herd), follow the leaders – usually the older mares – and be out in the open simply because if there’s a predator, they’re more likely to bolt, than stand and fight. That’s about it. If a horse is singled out he is more likely to turn to us without fear or aggression once he comes to realise that we are not predatory, and as a surrogate leader can offer the ultimate protection. And that’s where the ‘following’ or ‘joining-up’ comes in.

This principle works with wild/un-handled horses as well as re-training by reiterating the relationship of horse and leader for equines who have formed bad habits, or those with anxiety issues. Actually, most bad habits stem from anxiety and a lack of leadership. It’s a little like your pet dog – and dare I say children, too? – needing to know their safe and secure place in the family pack, although the body language between dogs and horses is rather different. Flattened ears in a dog is more likely to mean subservient greetings whereas a horse … well, watch out! 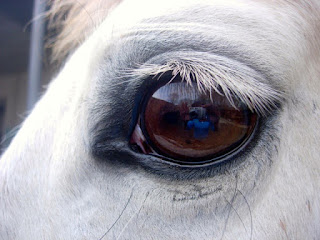 Not everyone agrees that these principles are quite so cut and dried, and as is often the case with a lot of unquantified skills, there is perhaps some sixth-sense at work gleaned from years of experience. There are many equine behavourists who claim the ‘following’ principle is flawed. But the proof is in the pudding. I’ve watched trainers use these techniques on a couple of riding-school horses – both of whom they’d never ‘met’ – with amazingly fast results: 20 minutes to resolve a problem with electric clippers on a mare which had for some 12 years, aggressively avoided the issue. The owner was quite rightly, open-mouthed. But the problem isn’t solved in its entirety, as the trainer explained: Tilly’s owner needed to learn and understand the process for herself, and as is the case with most success stories, a certain measure of self-belief is required. It’s this psychological leadership which is perhaps where the sixth-sense bridges that gap between human and equine.

Horses have been a lifetime’s passion for me. No surprise that they feature in most of my novels, more so in MIDNIGHT SKY and PALOMINO SKY. Both books draw on the principles of horse-whispering and the power of self-belief – but I take on this theme in a fictional sense rather than a technical sense. It’s so easy to swamp the narrative with too much unwanted detail. And yet, it’s the minutiae of life which underpins the storyline in Palomino Sky. As with horse-whispering, it’s the observation of perhaps something seemingly inconsequential which can change an entire situation. If you’re not horse savvy or enjoy only a passing interest, I’ve tried to portray the equine aspect as secondary to the storyline in these books. On the other hand, horse enthusiasts will hopefully embrace the setting. STRAWBERRY SKY completes the series. 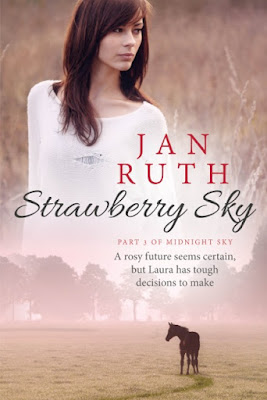 The real story began at school, with prizes for short stories and poetry. She failed all things mathematical and scientific, and to this day struggles to make sense of anything numerical.

Her first novel - written in 1986 - attracted the attention of an agent who was trying to set up her own company, Love Stories Ltd. It was a project aiming to champion those books of substance which contained a romantic element but were perhaps directed towards the more mature reader and consistently fell through the net in traditional publishing. Sadly, the project failed to get the right financial backing.

Many years later Jan's second novel, Wild Water, was taken on by Jane Judd, literary agent. Judd was a huge inspiration, but the book failed to find the right niche with a publisher. It didn't fall into a specific category and, narrated mostly from the male viewpoint, it was considered out of genre for most publishers and too much of a risk.

Amazon changed the face of the industry with the advent of self-publishing; opening up the market for readers to decide the fate of those previously spurned novels. Jan went on to successfully publish several works of fiction and short story collections and after a brief partnership with Accent Press in 2015, has returned to the freedom of independent publishing.

I write contemporary fiction about the darker side of the family dynamic with a generous helping of humour, horses and dogs. My books blend the serenities of rural life with the headaches of city business, exploring the endless complexities of relationships.

Huge thanks to Jan for being our guest on the blog today.
Jaffa and I wish you huge success with Strawberry Sky