Review ~ The Silent Wife by A S A Harrison 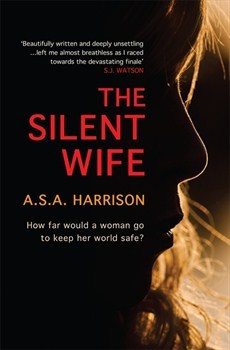 The disintegration of a relationship when one of the couple is hell bent on pressing the self destruction button should make for compelling reading, but for some reason The Silent Wife left me feeling a little bit underwhelmed by both plot and malice. On the surface Todd and Jodi seem to tick a long ok, but Todd is a serial philanderer and whilst Jodi seemingly puts up with his crass and stupid behaviour, underneath she is a simmering melting pot of bitter resentment and long held grudges. When Todd is caught up in a web of his own deceit and his world is crumbling around his ears, it would seem that Jodi eventually has had enough.

The book is not badly written far from it, there are moments of insight which ordinarily I would find compelling, however, my main discomfort lies with the characters. I found both Jodi and Todd deeply unlikeable and whilst unlikeabilty is no justification for completely writing off a novel, I am more than convinced that the book would have worked better for me, if at least one of them had been more congenial.

There are so many glowing endorsements on the cover of the book, that I really feel like I have missed the point of this novel, maybe the endorsers have read more into the ‘deliciously wicked’ aspect of the story. For me, it was neither delicious nor wicked; it was just an ok read, which was neither good nor bad,it was  merely indifferent.

My thanks to Real Readers for the opportunity to read this book.