This accomplished debut novel uncovers the minutiae of daily life and reveals the insatiability of greed, the sadness of family secrets and the destructive nature of overwhelming regret.

The story opens during the St Patrick’s Day Parade in Manhattan.  Old Rosa and her dog Barrell, meander through the crowds leaving behind a vile aroma of mouldering humanity. At a downtown Deli, Michael Marcinkus, the effusive proprietor, prepares a Macchiato for his customer. James is a man whose sadness permeates through to the bread, bagels and bakery goods and as he sips his macchiato, he mourns the loss of his lover. Three world-weary youths hangout outside a record store; bored and jaded they speculate on those whose lives interconnect with their own. The humiliation of hauling his bulk from the toilet seat to his wheelchair causes Malachi McBride to take his anger and frustration out on his nursemaid, Inez. Meanwhile, over a hundred miles away in Riverhead, Long Island a teenage girl yearns for something which is sadly out of her reach.

On the surface this cast of disparate characters should have absolutely no need to interact but gradually as the story unfolds, the lasting legacy of a pair of ruby slippers will have a profound effect on the lives of this contrasting group of individuals.

I found the story remarkably easy to read and very quickly became immersed in the lives of those who feature strongly in the story. There is a fine style to the writing with some moments of sheer brilliance and the conjured imagery goes from the hustle and bustle of a small town deli, to the squalid and foetid ambience of a hoarder’s hovel with comparable ease.

Overall, I found that I had a real connection with the characters, some I liked more than others but throughout the novel, the need to find out just a little bit more kept me turning the pages with real enjoyment.

I read this book as part of the lovereading.co.uk readers review panel. 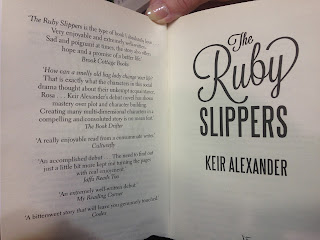