When forensic archaeologist Ruth Galloway uncovers a set of bones during an archaeological dig at Norwich Castle, they are believed to be those of the notorious Mother Hook, a nineteenth century baby farmer turned child murderer. The dig attracts the attention of a documentary film crew whose interest in 'women who kill' forms the basis for a voyeuristic television programme. At the same time, DCI Harry Nelson and his team of detectives are facing the worst of crimes as children are being inexplicably abducted. What then follows is which really focuses on human emotion.

This series of crime novels, this is currently number six in the pecking order, really do go from strength to strength and the ongoing relationship between Ruth Galloway and DCI Harry Nelson, as they attempt to make the best of their shared parental responsibilities, makes for lively and fascinating reading. As always the character analysis is incredibly specific, everyone is so utterly believable that you really could stumble upon them as they go about their daily business in Norwich and surrounding area. The police procedure feels authentic, and I am sure there are many CID teams who share the same amount of irreverent banter but who come together as fierce as lions when one of their own is threatened.

I devour these stories in one sitting, yes...they really are that good, and the need to find out just a little bit more will keep me enthralled in this series just as long as Ms Griffiths keeps them coming.

Huge thanks to NetGalley and Quercus Books for allowing me a copy of this book in advance of its publication. 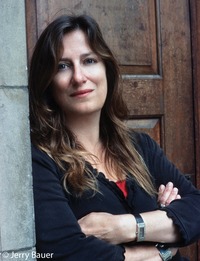 Elly Griffiths was born in London. She read English at King's College, London and worked in publishing for many years. Her crime novels are based in Norfolk and feature Dr Ruth Galloway, forensic archaeologist. She lives near Brighton with her husband, an archaeologist and their two children.
Posted by Jaffareadstoo..... at 13:17